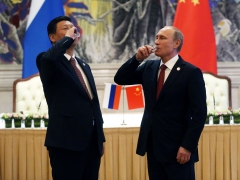 In the wake of mounting tensions between the U.S. and Russia over Ukraine, one now finds countless media stories on the "China-Russia axis" and the "bond between Russia and China." The ideological benefit of connecting Russia to China is undoubtedly clear to anti-Russia hawks. Russia is a relatively weak state with a small economy. China, on the other hand, tends to look more formidable. By connecting Russia to China in a new version of George W. Bush's "axis of evil," it becomes easier to downplay calmer voices noting the many limitations Russia faces in terms of its geopolitical ambitions.

But just how secure is this supposed Sino-Russian friendship? While the two states may broadly agree on the need to limit U.S. hegemonic power, the two are likely to also find many reasons to view each other as more immediate sources of conflict.

In his book "Unrivaled: Why America Will Remain the World's Sole Superpower," China scholar Michael Beckley notes there are many issues mitigating China-Russia "unity":

"Russia and China currently maintain a strategic partnership, but this relationship is unlikely to become a genuine alliance....In parts of the world that matter most to them, Russia and China are more rivals than allies....For every example of Sino-Russian cooperation, there is a counterexample of competition. For instance, Russia sells weapons to China, but it recently reduced sales to China while increasing sales to China's rivals, most notably India and Vietnam. Russia and China conduct joint military exercises, but they also train with each other's enemies and conduct unilateral exercises simulating a Sino-Russian war. The two countries share an interest in developing Central Asia, but Russia wants to tether the region to Moscow via the Eurasian Economic Union whereas China wants to reconstitute the Silk Road and link China to the Middle East and Europe while bypassing Russia."

The potential for an ongoing border dispute between Russia and China remains, as well. For its part, China has as many as 18 border disputes going on right now, and Russia continues to deal with several border issues with both Ukraine and Georgia. In Siberia, however, both states face a low-intensity conflict over the Russia-China border that is an ongoing source of division between the two states. While unlikely to lead to violent conflict in the near future, this border situation does provide an informative example of one of many ways that the Russia-China "partnership" faces many pitfalls.

What Is Russia's Far East Problem?

As Russia's population has declined, the Chinese side of the border looks increasingly like a source of political instability and ethnic incursion into Russian territory. Beyond the near term, this is likely to lead to more conflict over the exact location of the border and who dominates the region.

Many have noted this. In 2008 for example, the Hudson Institute's Laurent Murawiec published "The Great Siberian War of 2030," which explored the possibility for rising tensions along the Russia-China border. Murawiec notes that as Russia's population continues to decline and withdraw from Siberia — a term used in this context to mean everything east of the Ural Mountains — relative Chinese geopolitical strength in the region will continue to decline:

"A hollowed out Siberia will be similar to a vacuum hole sucking in outside forces to make up for the vanishing Russian presence. Conflict is neither inexorable nor prescribed by some mechanical inevitability, but the likelihood that disequilibrium may lead to turmoil must be taken into account as a realistic possibility."

A similar thesis appeared in The New York Times in 2014 with an article titled "Why China Will Reclaim Siberia." The author, Frank Jacobs, lays out the basic dynamics:

"The border, all 2,738 miles of it, is the legacy of the Convention of Peking of 1860 and other unequal pacts between a strong, expanding Russia and a weakened China after the Second Opium War. (Other European powers similarly encroached upon China, but from the south. Hence the former British foothold in Hong Kong, for example.)

"The 1.35 billion Chinese people south of the border outnumber Russia's 144 million almost 10 to 1. The discrepancy is even starker for Siberia on its own, home to barely 38 million people, and especially the border area, where only 6 million Russians face over 90 million Chinese. With intermarriage, trade, and investment across that border, Siberians have realized that, for better or for worse, Beijing is a lot closer than Moscow."

There are two main points here: the first, as outlined also by Murawiec, the population imbalance on the two sides of the border is very destabilizing. Eventually, this could even lead to China using a strategy similar to that now employed by Russia in eastern Ukraine: if the Russian borderlands end up with a sizable number of ethnic Chinese with ties to China, the Chinese regime could hand out Chinese passports on the Russian side of the border and then pursue de facto annexation in the name of protecting the ethnic minority from "encroachments" by Moscow.

Secondly, it's significant that the actual location of the border was not formed in the mists of ancient history, but is rather a result of nineteenth-century politics. The fact the border was set by the "unequal treaties" of 1858 and 1860 ties the current Russia-China border to China's "Century of Humiliation." It was during this period (approximately 1840-1950) when China was on the losing side of numerous wars and treaties inflicted on China by the world's great powers.

This continues to be highly relevant in the minds of some Chinese nationalists who base assessment of current policies in Beijing on the grounds of ensuring that another century of humiliation never occurs again.

Indeed, as recently as 1969, Russian and Chinese troops harassed each other across the border in northeast China. This eventually "escalated into a shooting match on March 2 and 15, resulting in heavy casualties." Although a shooting war over such matters presently appears remote, complaints over Chinese immigration in Siberia continue today. Those who are interested can even view on Amazon a 2018 documentary titled "When Siberia Will Be Chinese."

In 2020, China state media was sure to remind the Russian regime that Vladivostock was Chinese "before Russia annexed it via unequal Treaty of Beijing."

This “tweet” of #Russian embassy to #China isn’t so welcome on Weibo
“The history of Vladivostok (literally 'Ruler of the East') is from 1860 when Russia built a military harbor.” But the city was Haishenwai as Chinese land, before Russia annexed it via unequal Treaty of Beijing. pic.twitter.com/ZmEWwOoDaA

None of this means that China and Russia are necessarily going to come to blows in the near term. But it serves as an example of one way the two states face real potential conflict in the future. It is also reason to doubt that Russia and China are solid allies united in opposition to the West.

Perhaps Russia's best hope for retaining a solid hold over Siberia is the fact China's demographic bomb is even more extreme than Russia's.

That by itself would almost assure a Chinese takeover of Siberia were it not for the fact that China may be facing an even more dramatic drop in population. As the The Conversation noted in 2021,

"The Chinese Academy of Science predicts that if fertility continues to drop from its current rate of 1.6 children per woman to a projected 1.3, China’s population would be reduced by about 50% by the end of this century."

But a fertility rate of 1.3 is likely a high estimate. China's official records tend to stretch the truth, and the real fertility rate may be closer to 1.1. If true, the population decline could be dramatic indeed. Or, as the South China Morning Post put it,

A population that is elderly and shrinking fast is less likely to have the sources necessary to apply serious pressure to Siberia.

So, ultimately, at least on that front, demographic decline may pacify both parties. The Siberia situation is an important reminder, however, that Russian and Chinese interests do not necessarily coincide, and Russia is not the geopolitically secure juggernaut many Russophobes apparently believe it to be.