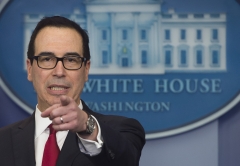 The Treasury Department released new federal spending and tax revenue data this week, and the U.S. government is spending and borrowing at a record-breaking rate.

The federal fiscal year begins in October, so we're now more than seven months in. Comparing the first seven months of this fiscal year with the same period of last year, the federal deficit of $1.48 trillion this year has ballooned to 70 percent above its previous peak of $869 billion reached during 2011.

This year's total so far is also up from $530 billion reached during the same period of last fiscal year.

For April alone, the total deficit was $737 billion. The far outpaces any previous month's deficit. During the Great Recession, the largest deficit reached during any single month was $231 billion reached during February 2012.

Adjusted for inflation, we see that for the first seven months of the fiscal year, 2020 towers above 2019, and is up 49 percent from the previous peak of 2011.

The enormous deficit was driven by two factors: weak tax receipts and a proliferation of various government bailouts and stimulus packages in response to March and April's economic collapse.

Given that the tax bills that would have come due in April 2020 were for income (and other taxable events) that occurred during 2019, the federal government can expect a bump to revenues later in the year when 2019 taxes are more fully collected. 2020 will be a year of quickly falling tax revenues, however, as the historically high levels of unemployment that began March begin to impact tax receipts.

But that hasn't slowed down federal spending at all. In April alone, the federal outlays totaled $979 billion, which was up more than two-and-a-half times April 2019's spending total of $375 billion. April 2020's spending was more than three times the size of federal receipts.

At this point, it appears clear that 2020 overall will break records in total deficits. The U.S. was already headed in this direction. For the full year of 2019, the federal deficit was heading rapidly back toward trillion-dollar deficits. What was notable about these huge deficits, however, was that they were occurring during economic boom times. Deficits usually moderate or go down during booms, but in the age of the "Trump Boom" federal deficits were rapidly expanding instead.

Now that the economy is quickly sliding into recession, we can expect 2020's deficits to continue, and to even exceed the previous peak of $1.7 trillion reached during 2009.

None of this should be surprising since as of May 8, federal lawmakers approved $2.4 trillion in new spending and various sorts of stimulus packages on top of the regular spending we expect. As noted recently by USA Today, the stimulus packages alone exceed the entire national GDP of countries like Italy and Canada.

Now, the Democrats are pushing for another round of stimulus packages totaling more than $3 trillion. The new round of stimulus will include more stimulus checks for individuals and families, bailouts for states, and rent assistance.

While the Republican majority in the U.S. Senate may reject this total, they are still likely to approve a similar package of slightly smaller size. This will more than double total federal spending from 2019 to 2020, with deficits quickly rising as tax receipts fall or stagnate.

Needless to say, the national debt (i..e, the sum of the annual deficits) is ballooning as well. The additional spending will push the total national debt, which was $23 trillion at the end of 2019, sailing past $25 trillion. This will put the U.S. government's debt-to-GDP ratio at the highest level it's been since the Second World War.

How long can this sort of out-of-control spending last? That depends on how long the U.S. dollar remains the world reserve currency. So long as that's the case, the United States can likely get away with issuing trillions of dollars in new debt month after month after month. After all, in a world with normal, functioning debt markets — i.e., a world we don't live in — a government would need to pay higher interest on its debt as it issues more of it.

The U.S. already pays more than $200 billion in net interest paid on the debt. However, as we noted in 2018, even small increases in interest rates would force the federal government to pay hundreds of billions more in interest payments. This would force cuts to federal programs like Social Security and military spending while placing more pressure on federal lawmakers to raise taxes. Potentially, the currency could even collapse and the U.S. would be forced to default on the debt with huge cuts in federal spending resulting.

So far, the U.S. has avoided this fate.  This is in part due to the fact the world still views U.S. bonds (for now) as a relatively risk-free investment compared to bonds from other countries. After all, for as much as the U.S. is engaging in deficit spending, much of the rest of the world is acting similarly, so U.S. debt ends up looking relatively good.

Another reason the U.S. avoids its day of reckoning on debt is the fact the U.S. dollar itself is still in demand as a global world currency. Foreigners still want dollars, and that makes it easier for the U.S.'s central bank to buy up U.S. government debt in order to keep interest rates low — and thus government debt payments. The central bank creates new money to do this, but this can only be sustained because so many foreigners want U.S. dollars which helps keep U.S. domestic price inflation low. In fact, demand for both U.S. dollars and debt is so high at the moment, there is a "dollar shortage."

As long as this situation persists, U.S. debt can continue to accelerate and spiral upward. Nothing lasts forever, of course, and at some point even the dollar and U.S. debt will cease to inspire confidence. When exactly this will happen is impossible to predict.

Ryan McMaken is a Mises Institute senior editor. Ryan has economics and political science degrees from the University of Colorado, and was the 2009-2014 Colorado Division of Housing economist. He also authored Commie Cowboys: The Bourgeoisie and the Nation-State in the Western Genre.