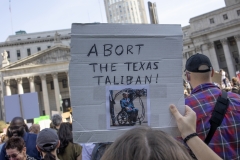 While the Supreme Court hearing on Dobbs vs. Jackson Women's Health Organization has reignited the abortion debate, the real discussion we should be having is not around politics, but rather abortion itself and whether a free country should have a right to it.

The divide has strengthened every year since abortion was legalized in 1973. Arguments get louder and lies become more far-fetched.

In early December, during an interview with MSNBC, Brittany Packnett Cunningham, an activist and regular MSNBC commentator made claims that the pro-life movement is rooted in preserving segregation and supporting a white supremacist religious right. Her argument centered on the idea that the pro-life movement is not founded around issues of life but instead on coalescing and holding power. Where is abortion, reproductive rights, privacy, healthcare, or choice in this?

No progress is made, on any issue, when one side simply calls the other a white supremacist. It’s washed-up, off-topic, and unproductive. It’s also disingenuous and a disservice to the many Americans who have moral beliefs about abortion and who realize Roe is built upon 1973 science which has changed due to technological advances.

Cunningham’s remark on MSNBC is not the only outlandish statement we have heard recently, nor is it likely to be the last. Pro-abortion activists have long utilized catchy,  incendiary remarks in order to disguise false or misleading information. MSNBC opinion columnist Dean Obeidallah compared the GOP’s record on women’s rights to that of the Taliban. This is a new fad. After Texas passed the Heartbeat Act, I was personally called a member of the Taliban by a reporter solely because I am a pro-life male in Texas.

The obsession for one side to quickly jump off the critical issue at hand is why the pro-life movement is winning in this debate – by staying on point. One side will discuss the issue and the other won’t. One side embraces science and recognizes the laws that currently protect unborn children (ask Scott Peterson, convicted of murdering his pregnant wife). One side is also growing, even with former abortion workers and women who have had an abortions, some leading the March for Life every year.

With that said, Cunningham was right that political power-grabbing did have something to do with the deep and often sharp historical division between the pro-abortion and pro-life positions.

In the current climate, there is an unwavering divide between Democratic and Republican stances on abortion; however, this has not always been the case. Surprisingly, positions on the topic have gone back and forth and historically have not been strictly defined. Neither party had a firm position until the 1976 election, when stances on abortion became a split issue, leading to the harsh polarization we see today.

In the 1980 election, the Democratic Party hitched its wagon to the abortion industry, paving the path for the association it has today. Since then we’ve seen the continual expansion of the liberal platform to include direct taxpayer funding, repeal of all federal and state abortion restrictions, and a push to make abortion as accessible and affordable as possible. The 1980s saw the Republicans adopt the pro-life language, which initially was supposed to be temporary but shortly catalyzed into an alliance with conservative evangelicals, merging religion and politics.

50-plus years of legislative, judicial, and grassroots abortion battles have only made the debate more relevant. Political ideologies and platforms change based on the cultural winds, but the issue of life transcends political priorities and movements. Recognizing or denying humanity to a segment of our population reveals who we are or are not as a nation. It deserves the seriousness from both sides and refusing to discuss it openly by name-calling disrespects what is at stake for both sides of the abortion debate.

Conversations about abortion are often avoided with family, with co-workers, or even by pastors. Why is it that we are as uncomfortable with abortion now than ever before and we’ve had it for nearly five decades? What other SCOTUS decision is still debated every election cycle or judicial nomination? This is one of the most common surgeries in our land and we haven’t gotten over it.

There were many moments during the oral arguments of the Dobbs case where the actual topic of abortion was even avoided or ignored. The awkwardness of the abortion debate, of pinning mother against child, life against rights, science against our will, is why Sandra Day O’Connor said that Roe was "on a collision course with itself" and why the late Ruth Bader Ginsburg argued it was bad law. We need to acknowledge that if talking about abortion is tempting to avoid within families and even in the highest court of our land, we should at least enter the conversations with respect for what’s at stake. Everyone would benefit if the abortion debate solely focused on abortion.

Shawn Carney is the CEO and president of the pro-life organization, 40 Days for Life.  He is also the best-selling author of “The Beginning of the End of Abortion” and “What to Say When: The Complete New Guide to Discussing Abortion.” To learn more about 40 Days, visit www.40daysforlife.com.