US National Intelligence Priority: WHO Director-General’s Ties to Communist China 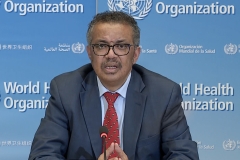 WHO Chief Tedros Adhanom Ghebreyesus attends a virtual news briefing on COVID-19 (novel coronavirus) from the WHO headquarters in Geneva on April 6, 2020. (Photo credit:-/AFP via Getty Images)

In his Senate confirmation hearing last week, Trump’s pick for Director of National Intelligence, Rep. John Ratcliffe (R-Texas), remarked that the Chinese authoritarian regime is working diligently “to supplant us as the world’s superpower.”

The fact that Communist China strategically orchestrates its goal of world domination by infiltrating, influencing, and funding organizations and leaders in the U.S. and around the world, should be taken very seriously by U.S. national intelligence.

Although the extent of the World Health Organization’s collaboration with China is still to be determined, investigation is warranted into WHO Director-General Tedros Adhanom Ghebreyesus’ strong ties to the Chinese Communist Party — ties which may be critically relevant to the early spread of coronavirus and which are still potentially dangerous.

During Tedros’ campaign for WHO director general, the Ethiopian Registrar made a series of allegations in an article called “Why TPLF is Desperately Fighting for Dr. Tedros to be the Next DG of the WHO.” The TPLF, or Tigray People's Liberation Front, is an historically Marxist-Leninist revolutionary party which ruled under cover of the Ethiopian People's Revolutionary Democratic Front during Tedros’ time as minister of foreign affairs. Tedros is one of the nine executive members or “politburo” of the TPLF.

The article states the TPLF’s mission was to place in leadership at Geneva one of their own “in position to have direct and indirect link with major international organization[s]….” The article also says Tedros was obviously not the best candidate whose “lack of knowledge and skill,” would harm WHO. Tedros is the first non-medical doctor to be elected to lead WHO, while runner-up David Nabarro is an Oxford M.D. with a master's degree in both endocrinology and public health who previously led the UN response to disease outbreak.

According to other Ethiopian news sources, TPLF invested “millions of dollars” into Tedros’ campaign for WHO director general. The government of Ethiopia began a contract in 2017 to pay $1.8 million to a U.S.-based public affairs firm, four months before the WHO election. It was signed by Girma Geda, at that time the Ethiopian Ambassador to the U.S., appointed under Tedros.

Chinese ambassador to Ethiopia (at the time) La Yifan also publicly supported Tedros as a “strong candidate” for DG. La Yifan is now director of international affairs at the Chinese Communist Party’s Central Commission for Discipline Inspection, which monitors party members and disciplines those suspected of “corruption, bad management or breaking with the party line.” Other connections to China are evident: Bernhard Schwartlander, Tedros’ chef de cabinet in Geneva, served as WHO representative in China immediately before working for Tedros.

Just this preliminary assessment of Tedros’ ties to Communist China brings deeper meaning to recent events surrounding the coronavirus and to WHO’s parroting Chinese talking points to cover up its spread. WHO, the United Nations' “global guardian of public health,” supported China's early “fake” claims about the virus and was slow to declare the virus an emergency even as it was spreading quickly worldwide.” Strange how in 2017, Tedros was accused of also covering up three cholera epidemics in Ethiopia while he served as minister of health from 2005 to 2012.

WHO’s ties to China are blatant and impossible to ignore, begging deeper investigation into how far China has infiltrated the organization and its leadership. If WHO, led by a willing Tedros, was complicit in aiding and abetting the Chinese Communist Party in deceiving the world about the outbreak, origin, and extent of the coronavirus – it is a crime that has cost over a hundred thousand lives and taxed the economies and well-being of millions.

It may be, as the Ethiopian Register stated, that Tedros is a "political candidate and will tarnish WHO’s reputation and noble mission if appointed…the purpose of his mission is to [save] TPLF, not the world from poor health or illness.”

Ratcliffe vowed as Director of National Intelligence that he would maintain focus on China as the United States’ “greatest threat actor.” Prudence for U.S. security dictates that intelligence should prioritize investigation into WHO and DG Tedros’ ties to Communist China.