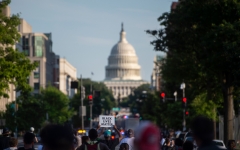 The June blockbuster jobs report is more evidence that the economy is healing, but this remains a brutal period for the some 30 million still unemployed Americans.

Nearly every industry — with very few exceptions — has been forced to impose layoffs, furloughs, or dramatic reductions in hours for its employees. The one major exception has been the United States federal government, which has had virtually no layoffs since the start of the year. Since January, federal employment has risen slightly, in part due to Census workers added. Meanwhile, through May, the construction industry has lost nearly 400,000 workers; manufacturing has lost 750,000 workers; retail trade has lost 1.25 million workers; health care and education have lost 1.75 million workers; and the hospitality industry has lost almost 5 million workers.

So much for draining the swamp. The one group of workers who have suffered no loss of wages, salaries, or benefits is federal employees.

Why no federal layoffs? Some are involved with health care, safety, and other vital jobs related to fighting the pandemic. But there are hundreds of thousands of federal workers at agencies such as the Departments of Education, Energy, Agriculture, and so on whose activities are nonessential. Most of these workers have not shown up in the office for three months now, but they keep getting full paychecks. That's why they call it Club Fed.

This is gross financial mismanagement by Congress, given that the federal government is running the biggest losses of any industry in American history — with a deficit of spending over revenues that is expected to reach at least $5 trillion this year. Where are the federal furloughs? Where is the 20 or 25 percent sequester of nonessential agency budgets?

Private sector workers lose their jobs. Government workers in Washington don't. What's wrong with this picture? No wonder the economy lockdowns are so popular in the nation's capital. No one inside the beltway bears any burden.

States and localities have been slowly furloughing workers. State and local public employment has fallen by more than 2 million workers since the start of the year (out of some 18 million employees). Overall, the latest Bureau of Labor Statistics report finds that private sector workers throughout this crisis have been laid off nearly twice as often as government employees.

House Speaker Nancy Pelosi's response has been to propose sending some $500 billion to the states and localities, in part so that those government employees can be rehired. Americans would much prefer helping private businesses get up and running and giving private workers a raise by cutting the payroll tax.

The imbalance between public and private employment is reflected in the overall government spending; the private economy shrunk by an estimated 30 percent in the second quarter of 2020, while government has metastasized to its largest level in peacetime history. This year will see the swiftest transfer of resources from the private sector to the government sector in American history.

Once again, Washington is proving itself recession-proof. All of America is being drained of economic resources and jobs — but the swamp lives on.