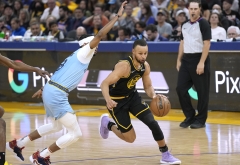 Stephen Curry #30 of the Golden State Warriors drives to the basket past Ziaire Williams #8 of the Memphis Grizzlies during the first half of Game Three of the Western Conference Semifinals of the NBA Playoffs. (Photo credit: Thearon W. Henderson/Getty Images)

When Golden State Warriors star Steph Curry was 13, he remembers his mom sitting him down after his team got crushed in a tournament that scouts were watching. She looked in his face, a moment he still remembers to this day, and said, "No one gets to write your story but you....Take your time...and write what you want to write. But just know that this story -- it's yours." Twenty-one years later, the world is finding out that the two-time MVP almost didn't have a story at all.

Sonya Curry had already had one abortion. "[I was] dating, you know, the older guy when I was in high school leading into college and making the decision about terminating a pregnancy," she said in an interview about her new book, "Fierce Love: A Memoir of Family, Faith, and Purpose." Thinking back to that time was hard, she explains. "Telling those stories and just reliving those feelings that I kind of suppressed and pushed down for a long time...you wonder, did it mess them up at some point?"

When she realized she was pregnant again, Sonya had convinced herself the only option was abortion. She remembers standing outside of a Planned Parenthood clinic, wondering if she could ever go through with it again. She says she felt "the Spirit interceding at that moment, in a way that I didn't even know at the moment was happening...." Hearing Him speak, she realized, "I don't want to make that decision again. And now I just gotta trust God to move forward with me having this child."

That's how close the three-time NBA champion came to not existing. "There could be no Stephen. If I would have gone through that, there would have been no Wardell Stephen Curry II." Sonya pauses in the interview with pastor Luke Norsworthy to marvel, "God had a plan for that child."

It's a story that Baltimore Ravens running back J.K. Dobbins can identify with. "I have a positive outlook on life, because I'm still living," the former Ohio State star has told reporters. No one knew how close the NFL pro came to not living until a couple of years ago, when Fox sportscaster Gus Johnson explained that the world wouldn't be watching this incredible talent if his mom, Mya, hadn't chosen life.

Late in the fourth quarter of one of his last college games, after more than eight million viewers had watched Dobbins spring into the end zone, another commentator shook his head in amazement. "What does this kid not do?" While J.K. was on the sidelines being congratulated, Johnson started sharing the powerful story of a teenage mom, who was one clinic visit away from making Dobbins a name this country had never heard of. "[J.K.'s] mom, Mya, became pregnant when she was 18 years old," he started. "She went to the doctor because she was thinking about aborting the baby -- but changed her mind. That baby turned out to be that young man, J.K. Dobbins," he added, "who she calls her 'miracle baby.'"

The idea that the sports world might never have witnessed his gift for the game was overwhelming to Johnson -- and everyone else -- in that moment. It crystallized, in one half-minute of television, what the abortion debate is all about. The world will never know how many millions of stories there would have been if more moms had been told the truth: that their babies had value and purpose and potential -- not because of what they could do, but because of who their Creator made them to be. Steph Curry and J.K. Dobbins aren't special because they're pro athletes. They're special because they were created in the image of a loving God who had a plan for their lives. Just like He had a plan for Andrea Bocelli, Celine Dion, Tim Tebow, Ashley Bratcher, Pope John Paul II, Steve Jobs, and so many other survivors we can't imagine the world without.

Curry was fortunate. But for every baby like him, there are so many others whose lives are ended before they begin. Theirs are the over 60 million voices we'll never hear, performances we'll never see, and Heisman winners we'll never meet because of abortion. If Sonya's story can save just one of them, the courage of those 255 pages will mean more than any basketball legacy ever could.

Suzanne Bowdey is a senior writer at the Family Research Council.