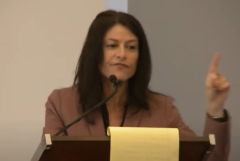 Half of the country now thinks America’s moral values are “poor,” Gallup says. And the question on most people’s minds must be: What’s wrong with the other 50%? “Poor” suggests that the nation’s moral values register at all — an assumption this Pride Month is quickly proving wrong.

When the speaker of the House is strutting the Ru Paul catwalk, the president is turning America into a welfare state for kids’ gender reassignments, and gay bars are becoming the latest elementary school hangouts, “morality” doesn’t exactly spring to mind. But despite cratering poll numbers in the Democrats’ core constituencies — blacks, Hispanics, suburban women, moms, and Gen Z — the party parades on, seemingly incapable of a course correction.

Michigan Attorney General Dana Nessel (D) only dug the hole deeper, insisting that “drag queens are fun,” and they “make everything better.” “[You] know what is not a problem for kids who are seeking a good education? Drag queens,” Nessel argued. “Drag queens are entertainment,” she insisted. “And you know what I’ll say that was totally not poll-tested? I’d say this, ‘A drag queen for every school.’”

Of course, it’s not the first time a Democrat has suggested the idea. A week ago, California State Senator Scott Weiner decided to play off his brilliant new idea for schools — mandatory Drag Queen 101 for K-12 — as a “joke,” after sparking national outrage.

Nessel, who has a personal interest in the LGBT agenda, got plenty of laughs at a Lansing conference, but Democratic strategists can’t think that it’s all that funny. If the primaries are a preview of things to come for Biden’s party, the midterm elections are shaping up to be a bloodbath for Democrats — and this latest LGBT excess isn’t helping. From Speaker Nancy Pelosi’s (D-CA) “your freedom of expression of yourselves in drag is what America is all about” to the president’s alphabet soup extremism, the campaign ads from Pride Month almost write themselves.

“‘A drag queen for every school’ is a great summation of today’s Democrat Party platform,” tweeted Donald Trump Jr. And a devastating one. Senator Marco Rubio (R-FL), responding to the Hispanic red wave sweeping through the country, put it bluntly: "People who claim to speak for Hispanics and actual Hispanic voters and everyday people are not the same thing. Hispanics don’t want to pay $5 for gas. Hispanics don’t want violent criminals running the streets. Hispanics don’t want schools trying to convince their son that he’s their daughter.”

And Hispanics aren’t the only ones. By almost every measure, Americans are rejecting the one thing Democrats have bet their reelection on: transgender politics. For Joe Biden’s party, who’ve hitched their wagon to this wildly unpopular agenda, it’s not a winning recipe. A string of recent polls, including Washington Stand publisher Family Research Council’s own, have blown the doors off the idea that leaning into this LGBT extremism might help Democrats in November. In six battleground states — Arizona, Georgia, Nevada, New Hampshire, Pennsylvania, and Wisconsin — voters flocked to the GOP’s side on a whole host of gender and education issues. On the conservative approach to girls’ sports (56-33 percent), sex changes for minors (56-31), sexual subjects in schoolrooms (60-34 percent), and parental notification of children identifying as transgender (59-30 percent), the GOP has up to a 29-point advantage over the Left’s positions.

“These numbers are yet another rebuke of the conventional wisdom championed by the RNC’s famous post-2012 election ‘autopsy,’” National Review’s Nate Hochman points out, “which argued for a softening of the GOP’s stance on cultural issues — and a recommitment to its Reaganite economic message — as a way to make inroads with nonwhite voters.” With record inflation and consumer prices hurting everyone, the GOP’s position on fiscal sanity still matters. “But this polling shows that cultural concerns should come first. Indeed, it reaffirms what many of us have been saying for years now: The GOP should embrace the culture war — not run from it.”

Paul Cordes, chief of staff of the Michigan Republican Party, couldn’t believe that anyone in Nessel’s position would even kid about these things. It’s “unbelievable,” he said. “This is not normal.” Nor is Nessel’s logic, which puts the responsibility for the tension in this country squarely on conservatives. Republicans are “create[ing] wedge issues that don’t help — that don’t heal us but divide us. And that’s all they do.”

But there’s only one wedge, most voters have decided. And it’s between high-level Democrats and basic common sense.

Suzanne Bowdey is a senior writer and editorial director for The Washington Stand.

Editor's Note: This piece originally appeared on The Washington Stand.