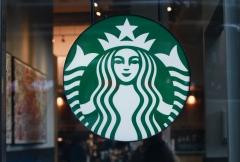 Featured is the outside of a Starbucks restaurant. (Photo credit: Kena Betancur/VIEWpress)

Starbucks pays big bucks for their PR firm's advice -- but not as much as they're about to pay for ignoring it. "Don't take a stance you cannot reverse," communications company Zeno Group warned corporate clients after the Supreme Court leak. A lot of major brands have listened, terrified of becoming the next Disney. Not this one. The coffee giant, who's never been afraid to stir the pot, is out with their most outrageous policy yet -- and every cup you buy helps pay for it.

At Seattle's most famous franchise, management wasn't content just paying for employees' abortion travel. (That's so Amazon.) Starbucks wanted to make a real statement, announcing that not only would they help employees abort their children -- but they'll pay to send the ones parents keep out of state to change their gender. A statement from the company's Sara Kelly announced that Starbucks is committed to the most outrageous forms of corporate activism -- including transgender payouts:

"Regardless of where you live or what you believe, partners enrolled in Starbucks healthcare will now be offered reimbursement for eligible travel expenses when accessing abortion or gender-affirming procedures when those services are not available within 100 miles of a partner's home."

In today's market, which hasn't exactly been kind to corporate zealots, Starbucks' move sounds delusional. Look at Target, whose racks of chest binders and packing underwear is already tanking the company's stock. After one week of bad publicity, the chain's shares tumbled 22.7 percent, and its first quarter earnings marked -- according to Yahoo financial -- the retailer's biggest decline since 1987 (even worse than the changing room crash of 2017).

But the reality is, the truly woke -- like Target and Starbucks -- don't care about your business. They care about making a political point. If that means upsetting half of their investors, then, in the infamous words of CEO Howard Schultz, "sell your shares." As he said then, "Not every decision is an economic decision." And a decade later, he still means it.

That much was obvious when the bosses at mermaid headquarters decided to take the policy public. They could have issued an internal document and been done with it. The fact that they didn't -- and instead crowed about their new policy in the media -- means that this is about a lot more than "taking care of employees." Starbucks is trying to influence the national conversation, and they're more than willing to sacrifice children to do it.

Remember, this isn't the first time Schultz's cultural calculus has put kids in the crosshairs. When the company wasn't spending thousands of dollars helping Planned Parenthood abort children, they were working to deprive them of a married mom and dad. Now, if they can't hurt kids in the womb, Starbucks will just drive them to surgeries that will. "This is the anti-woman, anti-child, anti-family society the Left has created," Fox's Rachel Campos-Duffy tweeted. "No more Starbucks for me."

Maybe Starbucks doesn't care about the boycott that's brewing -- but their investors will. "Subjects that divide the country can sometimes be no-win situations for companies," Zeno cautioned, "because regardless of what they do they will alienate at least 15 to 30 percent of their stakeholders...do not assume that all of your employees, customers, or investors share your view."

For companies like Starbucks, which sell some of the easiest luxuries for families to cut, this is the worst possible economy to outrage patrons. Americans are already struggling to afford the necessities. If they weren't already rethinking their routine of mediocre, overpriced coffee, they are now that it's a bold blend of social extremism.

"Tell me," Justin Danhof said on "Washington Watch," "other than Planned Parenthood, what company was founded with a mission to snuff out human life?...I can't think of a company that was founded with the mission [to kill] in place." That's why this corporate obsession with abortion is so disturbing. Danhof is praying more people, as investors and customers, tell companies like Starbucks, "Just knock it off. Stay out of it." No one pulls through a green-and-white drive-thru expecting a double-shot venti abortion with extra transgenderism. Now, no one has a choice.

And no one has an excuse either. If Starbucks is part of your daily grind, it's time -- as Christians -- to reconsider. "So whether you eat or drink or whatever you do, do it all for the glory of God" (I Corinthians 10:31). One day, we'll all be held accountable for how we managed what God gave us. And while some choices are out of our control (not everyone can ditch their banks, build their own microchips, or charter a plane), we can get our caffeine high from a company that doesn't get theirs destroying innocent lives.

Contact Starbucks and ask them to end their war on children. It's time for headquarters to wake up and smell the pushback!

Suzanne Bowdey is a senior writer at the Family Research Council.