Hawks Make Little Distinction Between Russia and the Soviet Union 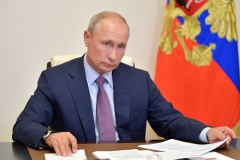 An especially graphic example is a recent article in 19FortyFive by Michael Rubin, a senior fellow at the neoconservative American Enterprise Institute. The title, "Russia Was a Rogue State Long before Ukraine and Georgia," accurately conveys the extent of Rubin’s Russophobia. Predictably, he blames Moscow entirely for the 2008 Georgia war, even though a European Union investigation concluded that Georgian President Mikheil Saakashvili’s forces initiated the fighting. Likewise, he studiously ignores the assistance that the United States and some of its European allies gave demonstrators who unseated Ukraine’s elected, pro-Russian president as a trigger for Russia’s subsequent annexation of Crimea.

No, according to Rubin, such episodes are indicative of Vladimir Putin’s strategy to "recreate the Soviet Union in all but name." He then condemns the administrations of Barack Obama, Donald Trump, and Joe Biden for insufficient resolve in the face of such malignant, imperial ambitions. However, Rubin asserts that the "real problem is deeper. Russia’s aggression and sense of impunity did not begin with Georgia, but rather with Japan. In the tail end of World War II, Russia seized southern Sakhalin and the Kuril Islands from Japan."

There’s just one problem with his thesis: The seizure of territory from Japan was made by the Soviet Union. There was no independent "Russia" in 1945, and it reflects extreme intellectual laziness to use the terms interchangeably, as Rubin and some other analysts do. During the Soviet era, Russia was just one component of the USSR, albeit the largest one. Moreover, it is incorrect to assume that ethnic Russians always ran the communist state. The longest-tenured Soviet dictator (who ruled for nearly 3 decades) was Joseph Stalin – a Georgian, not a Russian. Nikita Khrushchev, who led the USSR for more than a decade, was ethnically Russian but grew up in Ukraine and was culturally Ukrainian. Indeed, according to his great-granddaughter, Nina Khrushcheva, he was exceptionally fond of Ukraine. It probably was not a coincidence that Khrushchev was the person who made the decision to transfer Crimea, which had been part of Russia since 1782, to Ukraine.

There are other reasons why a sharp distinction needs to be made between the Soviet Union and the noncommunist Russia that emerged when the USSR dissolved in December 1991. Today’s Russia is markedly different from the Soviet Union economically, politically, and ideologically. At the end of the Cold War, the USSR had the world’s second largest economy; Russia in 2020 ranked eleventh – just behind South Korea. The Soviet Union embraced Marxist-Leninist economics, whereas Russia is very much part of the capitalist world. Granted, the capitalism it practices is an extremely corrupt variety characterized by cronyism, but it is still a far cry from the rigidly centralized, government-run economy of the Soviet era. Politically, Putin’s rule embodies a conservative authoritarianism, not the outsized, revolutionary ambitions of the USSR’s communist rulers.

Militarily, there also is a massive contrast between the Soviet Union and Russia. The former sought to keep up with the United States in terms of both military spending and capabilities. The strain of that quest was a major reason for the country’s eventual implosion. Moscow’s current annual military outlays are less than one-tenth of U.S. expenditures, and the budget is comparable to those of Britain, France, Japan, and other regional powers.

The bottom line is that the Soviet Union was an expansionist, totalitarian great power with superpower pretentions. Today’s Russia is a conventional regional power trying to preserve a sphere of influence in its immediate neighborhood against encroachment by an extraordinarily capable U.S.-led military alliance. I’m astonished at how often supposed military or foreign policy experts on television news shows make no distinction between the Soviet Union and Russia in their presentations. Some even misspeak and refer to "Soviet" actions or goals, when it’s apparent that they mean "Russia."

For Rubin and fellow hawks, it is as though the dissolution of the USSR at the end of 1991 never took place. The policies they advocate implicitly treat Russia as an inherent enemy no different from the West’s mortal adversary during the Cold War. Indeed, that corrosive attitude has dominated thinking throughout most of the U.S. foreign policy establishment and news media.

The mentality emerged early in Bill Clinton’s presidency, when U.S. officials pushed to expand NATO eastward toward the Russian border, a policy that George W. Bush’s administration eagerly intensified. Perhaps such a destructive mindset was inevitable, since that generation of policymakers had been so thoroughly marinated in the rhetoric and perceptions of the Cold War. It was especially significant, though, that Washington adopted a provocative, confrontational policy before Russia did anything even hinting at threatening, expansionist behavior. To use Rubin’s own standard, such belligerent behavior on Washington’s part occurred long before Russia’s actions in Georgia or Ukraine.

Citing Soviet misconduct as a justification for adopting a hostile policy toward Russia is not only inappropriate, but outrageous. Germany in the 21st century is not to blame for Nazi Germany’s awful depredations. Democratic Japan is not responsible for the Nanjing massacre and other crimes that Imperial Japan committed. Turkey is not to blame for the Armenian genocide waged during the final years of the Ottoman Empire. And today’s Russia should not be held accountable for either the human rights abuses or the acts of aggression that the Soviet Union committed. America’s political and policy elites need to change their thinking.