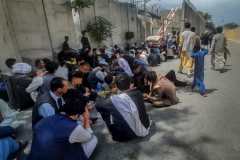 Washington’s reputation as an effective imperial power experienced another humiliating setback in August with the implosion of the U.S.-backed government in Kabul.

The sight of helicopters urgently ferrying American diplomats from the embassy to the Hamid Karzai International Airport (named after an earlier U.S. Afghan puppet) was all too reminiscent of the chaos in Saigon when Washington’s client regime collapsed in April 1975. So, too, was the emotionally wrenching scene at that airport when desperate Afghans clung to the fuselage of a departing evacuation aircraft.

The Biden administration could be heading for a similar foreign policy and public relations fiasco in Iraq. As with the Vietnam and Afghanistan missions, multiple presidential administrations not only approved a prolonged, ill-conceived military intervention with U.S. troops; they staked the success of the Iraq mission on supporting a "democratic" government. And as in the cases of Vietnam, the client regime in Baghdad is not especially democratic, and even worse, it exhibits multiple signs of corruption and incompetence. Indeed, U.S. leaders exhibit contempt for that government far more often than even perfunctory respect.

One of the main reasons for the collapse of Washington’s earlier clients in both South Vietnam and Afghanistan is that they had very shallow domestic political roots. Major segments of the populations saw the incumbent regimes (correctly) as appallingly corrupt and undemocratic. Even more significant, their image with much of the public was that of a puppet doing the bidding of a hated foreign power whose troops continued to occupy the country. Even though the armed faction resisting the U.S. occupation was not necessarily loved by most people, it was at least considered the lesser of two evils. A nearly universal truth in international affairs is that populations deeply resent foreign rulers and their domestic puppets. That was definitely the case in South Vietnam and Afghanistan, and similar conditions exist in Iraq.

Washington’s conduct has not helped the regime in Baghdad develop a reputation for legitimacy. Not only was the current political system established by U.S. force of arms when U.S. and allied troops overthrew Saddam Hussein, but American leaders seemingly have gone out of their way to highlight that government’s continuing status as a U.S. dependent—if not an outright stooge. The creation of the Western-run "green zone" in the middle of Baghdad emphasized that point early on, but it’s hardly the only example.

Actions that Donald Trump’s administration took confirmed a sneering patron-client relationship beyond any reasonable doubt. In early January 2020, Washington used a drone strike to assassinate Iranian General Qassem Soleimani outside Baghdad–a brazen violation of Iraq’s sovereignty. Carrying out the assassination on Iraqi territory when Soleimani was visiting at the invitation of Prime Minister Adel Abdull Mahdi to discuss a new peace feeler from Saudi Arabia, was especially contemptuous. The killing of Soleimani (as well as two influential Iraqi militia leaders) led Iraq’s parliament to pass a resolution calling on Mahdi to expel U.S. forces stationed in the county.

Trump’s reaction to the prospect that Baghdad might order U.S. troops to leave showed utter disdain for the very concept of a sovereign Iraq. Trump threatened Baghdad with harsh economic sanctions if it dared take that step. Indeed, Trump thundered that “we will charge them sanctions like they’ve never seen before, ever. It’ll make Iranian sanctions look somewhat tame.”

It soon became apparent that the sanctions threat was not just a spontaneous, intemperate outburst on the part of a notoriously volatile U.S. president. Compelling Iraq to continue hosting U.S. forces clearly was entrenched administration policy. Senior officials from the Treasury Department and other agencies began drafting specific sanctions that would be imposed. Washington explicitly warned the Iraq government that it could lose access to its account held at the Federal Reserve Bank of New York. Such a freeze would have amounted to financial strangulation of the country’s already fragile economy. The U.S.-held account represented nearly 90 percent of the Iraqi government’s budget. Faced with the prospect of immediate national bankruptcy, Iraq’s "leaders" unsurprisingly capitulated.

Iraqi public pressure for U.S. forces to leave has continued, however, and Joe Biden’s administration negotiated a new fig leaf arrangement. American troops supposedly will now serve only as "advisors," not combat personnel. The bottom line, though, is that the U.S. occupation army will remain in place, and the label change is not likely to fool, or even placate, discontented Iraqis. Moreover, Biden showed his own contempt for Iraq’s supposed sovereignty on several occasions by ordering air strikes on pro-Iranian militias in both Iraq and Syria over the protests of the Baghdad government.

Such actions do not advance the prospects for that government’s survival once U.S. forces depart, which they likely will have to do at some point given the rising internal opposition. Washington’s behavior has underscored that Iraq’s "leaders" are little more than pawns that stay in office at the sufferance of the country’s imperial overlord. Such a regime might not last much longer than did their South Vietnamese and Afghan counterparts if U.S. troops leave.

The one hope for Washington’s policy is that in contrast to South Vietnam and Afghanistan, the anti-U.S. movement in Iraq is itself bitterly divided. Iraqi Shias (especially the pro-Iranian contingent) want the United States to leave, but they also fear ISIS and other Sunni extremists. That worry might impel them to support the Baghdad government as the lesser of two evils. The militias have had a love-hate relationship with that government from the beginning, and that tenuous connection may continue for at least some time. The other, Sunni-dominated faction, consisting of both Islamic extremists and remnants of Saddam’s Baath Party, definitely wants U.S. forces out of Iraq. However, those activists also want to end the current rule of the country’s Shia majority. It will prove extremely difficult for two antagonistic factions to cooperate effectively in a campaign to force Washington to withdraw its troops.

Despite such significant differences between the situation in Iraq and the conditions that led to the demise of the U.S. client regimes in South Vietnam and Afghanistan, there also are troubling similarities. The Iraqi government is notoriously corrupt and inefficient, just as were the other two regimes. It also has shallow political roots as did its Afghan and South Vietnamese counterparts, lacking a strong contingent of dedicated domestic supporters, much less supporters committed to fight for a modern, democratic political system.

Once again, Washington appears to be backing a weak, corrupt client that could collapse with dramatic speed. Television cameras might well capture a hasty, chaotic U.S. exit from Baghdad in a few years that would again evoke unpleasant memories of Saigon in 1975 and Kabul in 2021.