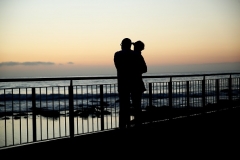 A father and son are seen taking in the sunrise. (Photo by Don Arnold/Getty Images)

In 1941, when the Japanese bombed Pearl Harbor and the United States entered World War II, there were 2,515,427 babies born in this country. Of those babies, according to the Centers for Disease Control and Prevention, 95,700 — or 3.8% — were born to unmarried mothers.

The traditional family led by a mother and father was a foundational fact of American culture.

Then in the 1950s, the percentage of American babies born to unmarried mothers began to slowly tick upward, hitting 5.2% by the end of that decade.

By 1969, as this column has noted in reviewing these numbers before, 10% of American babies were born to unmarried mothers. In 2008, it surpassed 40%.

This country is not headed in the right direction. A generation will soon be coming of age in which a large percentage of the population will have been denied a traditional family life.

What happens when families fall apart or fail to form in the first place? Government, as this column has noted before, gets bigger and takes more control over people's lives.

In 1941, Medicaid, which is a form of welfare, did not exist. "Authorized by Title XIX of the Social Security Act, Medicaid was signed into law in 1965 alongside Medicare," says the program's official website. "All states, the District of Columbia, and the U.S. territories have Medicaid programs designed to provide health coverage for low-income people. Although the Federal government establishes certain parameters for all states to follow, each state administers their Medicaid program differently, resulting in variations in Medicaid coverage across the country."

By July 2021, according to the Centers for Medicare and Medicaid Services, there were 76,705,180 people enrolled in Medicaid. Last fiscal year, according to the Monthly Treasury Statement, the federal government spent $520.58 billion on that program.

When Medicaid was created in 1965, 7.7% of American babies were born to unmarried mothers.

By 2020, according to the CDC's latest birth report, the percentage of American babies born to unmarried mothers had risen to 40.5%.

The percentage born on Medicaid, according to the CDC report, was 42%.

As this column has also noted before, Census Bureau data shows that the traditional family and economic well-being are interconnected. In 2020, according to the bureau, only 4.7% of married couple families in this country lived below the poverty level. But at the same time, 38.1% of female householders with children under 18 and no spouse present lived in poverty, as did 46.2% of female householders with no spouse present and children under 6.

If America continues on a long-term trend in which 40% or more of the babies born each year are born to unmarried mothers and even more than that are born on Medicaid, it is hard to see how this country will prosper.

This nation was built by pioneers who sailed across broad oceans and ventured onto vast prairies, seeking to live their lives self-sufficient and free. They did not want to be dependent on government. They wanted to be independent.

We should teach our children and our grandchildren to emulate those pioneers who gave us this great country.