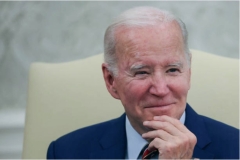 When President Joe Biden sent Congress his budget proposal for fiscal 2023 last March, he tried to sound as if he were a fiscal conservative.

"My Budget details the next steps forward on our journey to execute a new economic vision, reduce costs for families, reduce the deficit, and build a better America," Biden said in the budget message that began his proposal.

"Critically, my Budget would also keep our Nation on a sound fiscal course," he claimed.

"The deficit is on track to drop by more than $1 trillion this year, the largest-ever one-year decline," said Biden's proposal. "Under the Budget policies, annual deficits would fall to less than half of last year's levels as a share of the economy, while the economic burden of debt would remain low.

"The Budget's investments are more than paid for through additional tax reforms that ensure corporations and the wealthiest Americans pay their fair share, allowing us to cut costs for American families, strengthen our economy, and cut deficits and debt by more than $1 trillion over the coming decade," said the proposal.

But if you scroll down to pages 142 and 143 of Biden's proposal — its last two pages — you will discover Table S-10: "Federal Government Financing and Debt."

This table tells a different story than Biden himself does.

It includes a subsection that carries the headline: "Debt Outstanding, End of Year." It shows what the Biden administration predicts the total federal debt would be — under the terms of Biden's budget proposal — at the end of each fiscal year through 2032.

That is an average increase of $1.49 trillion per year.

So, what did Biden mean when he said that under his leadership the deficit was on track to decline by more than a trillion dollars in fiscal 2022, which would be "the largest-ever one-year decline"?

The relative drop in the federal deficit in fiscal 2022 was the result of the anomalous and altitudinous increase in federal spending in fiscal 2020 and 2021 due to the COVID-19 pandemic.

"In early 2020, the U.S. Congress appropriated funds in response to the COVID-19 pandemic," explains the federal government's USASpending.gov website. "These funds were made possible through the Coronavirus Aid, Relief, and Economic Security (CARES) Act and other supplemental legislation. In March of 2021, additional funds were appropriated through the American Rescue Plan Act."

In total, according to USASpending.gov, the federal government spent $4.1 trillion on the COVID pandemic.

Is Biden planning on bringing the federal deficit back down to its Obama-era levels? No.

Treasury Secretary Janet Yellen sent a letter to House Speaker Kevin McCarthy last week asking him to immediately increase the statutory limit on the federal debt, which, she noted, is currently "approximately $31.381 trillion."

"I am writing to inform you that beginning on Thursday, January 19, 2023, the outstanding debt of the United States is projected to reach the statutory limit," said Yellen. "Once the limit is reached, Treasury will need to start taking certain extraordinary measures to prevent the United States from defaulting on its obligations."

"It is therefore critical that Congress act in a timely manner to increase or suspend the debt limit," she said.

Yellen made no suggestion that Congress should also start cutting federal spending so the Treasury does not have to borrow as much to cover that spending.

That is more debt than the federal government accumulated in the 233 years from 1776 through 2009.