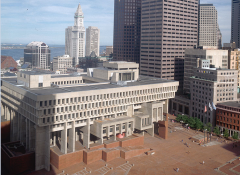 Not long after al Qaeda terrorists flew commercial jets into the World Trade Center in New York and the Pentagon in Northern Virginia, Major League Baseball teams started playing "God Bless America" in the seventh inning of their games.

Many of these games were played in stadiums owned by local governments.

Did that establish a religion?

In Boston, the municipal government concluded that allowing a private group — Camp Constitution — to temporarily lift its Christian flag on a city-owned flagpole would suggest that the city was establishing a religion — and, thus, violating the First Amendment.

On the same flagpole, however, Boston itself raised the flag of the People's Republic of China.

China, of course, is a communist, atheist regime.

Camp Constitution, by contrast, as noted in a brief it submitted to the Supreme Court, "is an all-volunteer association formed in 2009, offering classes and workshops on subjects such as U.S. History, the U.S. Constitution, and current events."

"Camp Constitution's mission," it said in its brief, "is to enhance understanding of the country's Judeo-Christian heritage, the American heritage of courage and ingenuity, the genius of the United States Constitution, and free enterprise."

The case that Camp Constitution and its founder, Harold Shurtleff, brought against Boston for denying this organization the opportunity to fly its flag on the same pole where the People's Republic of China's flag had flown went all the way to the Supreme Court. Last month, the court correctly ruled in favor of Camp Constitution and against Boston.

In front of the Boston City Hall there are three flag poles. One, the group's brief explains, flies the American flag and the flag of the National League of POW/MIA Families; another flies the Massachusetts flag; and the third usually flies Boston's municipal flag.

In 2017, Camp Constitution planned on holding an event on the plaza outside the city hall and requested permission to raise what it called its "Christian flag" on the third pole.

In addition to raising the flag of the People's Republic of China outside its city hall, the city of Boston admitted in its own brief to the court that it had also raised "the LGBT rainbow Pride flag" and the "pink transgender rights flag."

But it turned down Camp Constitution's modest Christian flag, which the Supreme Court described as being "a red cross on a blue field against a white background."

"The City had never denied a flag raising request prior to Petitioners' request," Boston said in its brief.

"The City considered Petitioners' request to be the first it had received related to a religious flag," it said.

Gregory Rooney, the commissioner of the city of Boston Property Management Department, responded to Camp Constitution on the city's behalf. "Rooney responded that the City's policy was to refrain respectfully from flying non-secular flags on the poles in accordance with the First Amendment's prohibition of government establishment of a religion and in keeping with the City's authority to decide how it uses limited government resources," the city said in its brief.

Boston then argued that when it allowed third-party flags to fly on its third flagpole it was "engaging in government speech" and would not "engage in speech it does not endorse."

"The Petitioners' contention that the City violated their free speech rights when the City denied the request to fly a Christian flag in front of City Hall must fail," Boston told the court. "When the City raises a third-party flag on the City Hall Flag Poles, which are prominently located in front of City Hall and over which the City maintains ownership and control, it is engaging in government speech consistent with the Court's recent decisions ..."

"When engaging in government speech, the City has the same freedom to express itself as individuals and cannot be compelled to engage in speech it does not endorse," said the Boston brief.

"The City's flagpole is not a public forum, it is government property which the City may use in a manner best suited to its goals," Boston argued. "Petitioners therefore have no constitutional right to express their message on the City's flagpole nor can they force the City to express itself in a particular way."

"Government has the same freedom to express itself as it wishes even when receiving third-party assistance for the purpose of delivering a government message," said the city's brief.

Presumably, then, when the flag of the People's Republic of China and the "transgender rights flag" were flying on Boston's city-owned flagpole, the city of Boston was expressing itself.

These flags, unlike the Christian flag that Camp Constitution wanted to fly, apparently did not make the city of Boston feel as if it had been "compelled to engage in speech it does not endorse."

"(T)he city's refusal to let Shurtleff and Camp Constitution fly their flag based on its religious viewpoint violated the Free Speech Clause of the First Amendment," Breyer concluded.

Next, we will see if this same court rejects the absurd argument that an assistant high school football coach established a religion when he habitually said a postgame prayer on a public-school football field.