Can Obama and Congress Order You to Buy Broccoli? 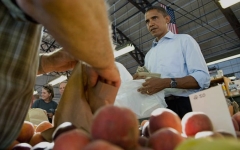 Can President Barack Obama and Congress enact legislation that orders Americans to buy broccoli? If so, where did they get that authority? What provision in the Constitution empowers the federal government to order an individual to buy a product he does not want?

Can President Obama and Congress enact legislation that orders Americans to buy health insurance? They might as well order Americans to buy broccoli. They have no legitimate authority to do either. Yet neither Obama nor the current leadership in Congress seems to care about the constitutional limits on their power.

They are now attempting to exert authority over the lives of Americans in a way no president and Congress has done before.

In 1994, when Congress last pondered a national health care plan that would require all Americans to purchase health insurance, the Congressional Budget Office studied the issue.

“A mandate requiring all individuals to purchase health insurance would be an unprecedented form of federal action,” the CBO concluded. “The government has never required people to buy any good or service as a condition of lawful residence in the United States.”

When the Senate Finance Committee was debating its version of health care reform legislation this month, Republican Sen. Orrin Hatch of Utah tried to offer an amendment that would have expedited judicial review were the bill enacted because Hatch saw multiple constitutional problems with the proposal. Ordering individuals to buy health insurance was one of them.

“The only conceivable constitutional basis for Congress requiring that Americans purchase a particular good or service is the power to regulate interstate commerce,” said Hatch.

“Even if the Supreme Court has expanded the commerce power, there has been one constant,” Hatch continued. “Congress was always regulating activities in which people chose to engage. They might be non-commercial activities or intra-state activities, but they were activities.”

Yet the committee’s health care proposal, Hatch said, did something entirely different.

“Rather than regulate what people have chosen to do, it would require them to do something they have not chosen to do at all,” he said. “If we have the power simply to order Americans to buy certain products, why did we need a Cash-for-Clunkers program or the upcoming program providing rebates for purchasing energy appliances? We could simply require Americans to buy certain cars, dishwashers or refrigerators.”

Or broccoli, or carrots, or “medical marijuana” for that matter.

The Constitution’s commerce clause is short and simple. It says: “The Congress shall have Power ... To regulate Commerce with foreign Nations, and among the several States, and with the Indian Tribes.”

Now, imagine an American sitting on his back porch casually enjoying the would-be anathematized state of not owning health insurance. When it comes to health insurance, this American has not been, is not and never intends to be engaged in any form of commerce with any entity in any foreign nation, distant state or Indian tribe.

If he did decide to engage in health-insurance related commerce with any entity in a foreign nation, distant state or Indian tribe, Congress could constitutionally regulate that action. But this American simply won’t oblige. As a free person—like generations of Americans before him—he has weighed the risks and benefits of buying health insurance, and he has decided not to buy it. He is fully ready to accept the good and bad consequences of this decision.

All he wants from the government is to be left alone.

For President Obama and Congress to reach into this American’s backyard and force him to buy health insurance would be a blatantly unconstitutional act.

But in the Finance Committee, Chairman Max Baucus, a Democrat from Montana, refused to allow a vote on Sen. Hatch’s amendment to expedite judicial review of provisions in the health care bill. In this case, Baucus was punctilious about Senate rules on limits of his committee’s authority. Hatch’s amendment, he ruled, involved an issue under the jurisdiction of the Judiciary Committee. The Finance Committee must not touch it.

All versions of the health care bill under consideration in Congress would order Americans to buy health insurance. If any of these bills is enacted, the first thing it would accomplish is the amputation of a vital part of our Constitution, and the death of another measure of our liberty.