Congressman Who Disbelieves in God Speaks at Christmas Tree Lighting

The Freedom From Religion Foundation honored Democratic Rep. Jared Huffman of California three years ago with what it calls its "Emperor Has No Clothes Award," named after the story by Hans Christian Andersen.

"In the story two weavers con a gullible emperor by selling him expensive cloth they claim is so exquisite only the very wise can see it," said the foundation. "The emperor parades before his cowed subjects in his imaginary finery, until an astute child calls out: 'But the emperor has no clothes!'

"Religion, the Foundation contends, has a similar imaginary base," it explained. "The award is reserved for public figures who take on the fabled role of the little child in the Hans Christian Andersen fairy tale and 'tell it like it is' — about religion."

Huffman gave a speech when he received this award.

"When I look out at all of the brilliant, talented, principled people in this room, my first thought is that if being a nonbeliever means I have to burn in hell for eternity, I'm going to have good company," Huffman said. 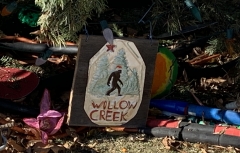 A Bigfoot ornament on the Capitol Christmas Tree.

Huffman went on to say "how fortunate I am to be in an era when a member of Congress can come out publicly as a nonreligious humanist and politically live to tell about it. It hasn't always been possible for national political figures to do things like that."

"In fact," he said, "in the history of the United States Congress before I came out, you can only find one member — Rep. Pete Stark (D-California) — who had publicly acknowledged not believing in God."

Huffman said that before he publicly revealed his disbelief, he had spoken about what he intended to do with Rep. Nancy Pelosi of California, who is now the Democratic speaker of the House. 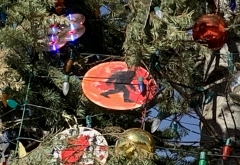 "I really thought when I went to Pelosi, who's a devout Catholic who probably doesn't want people associating Democrats as godless heading into the midterm election — I thought I'd get a lot of concern and maybe even some dissuasion," said Huffman. 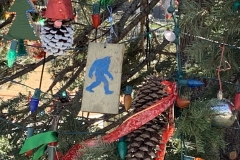 "In fact," he said, "she applauded me for being true to myself. She said she thought that humanism was a beautiful thing. So that was surprising."

Huffman went on to become a co-founder of the Congressional Freethought Caucus, which includes among its goals opposing "government discrimination against atheists, agnostics, humanists, seekers, religious and nonreligious persons." 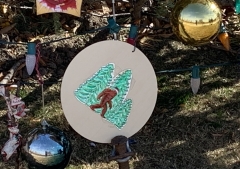 In 2019, Huffman did an interview with an online program produced by the Freedom From Religion Foundation and co-hosted by the group's co-founder, Annie Laurie Gaylor. In that interview, Huffman expressed his opposition to the Hyde Amendment, which prohibits federal funding of abortion.

"I wonder if you might talk a little about the concern that we all have now with reproductive rights?" Gaylor asked Huffman.

"This may be the greatest example of all, where certain fundamentalists are so fervently opposed to abortion that they are willing to pass these laws and chip away at women's reproductive choices," Huffman said. 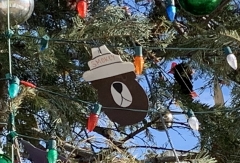 A Smokey Bear ornament on the Capitol Christmas Tree.

"Every single year we will have multiple battles over the Hyde Amendment and other things. So, it's a great example. It's entirely based on religion," he said.

"Are you looking at maybe after 2021 you might actually have a chance to repeal the Hyde Amendment?" Gaylor asked him.

"Well, I think we should," said Huffman, whose voting record has been scored at 100% for the last four years by NARAL Pro-Choice America.

Huffman further explained why he believed it was wrong to make a congressional witness take an oath to God. "It is unconstitutional to require a witness in congressional testimony to affirm an oath to a deity they may not even believe in," he said. 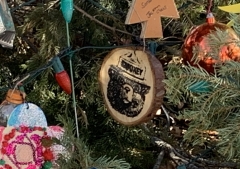 A Smokey Bear ornament on the Capitol Christmas Tree.

Last week, Huffman was one of only five members of Congress who joined Pelosi in speaking at the annual lighting of the Capitol Christmas Tree. The other four were House Minority Leader Kevin McCarthy, Republican Rep. Doug LaMalfa, Democratic Rep. Zoe Lofgren and Democratic Sen. Dianne Feinstein, all from California.

Christmas, of course, celebrates the birth of Jesus Christ, who is true God and true man.

One obvious explanation for Huffman partaking in the Capitol Christmas Tree lighting is that this year's tree was cut down in his congressional district.

Yet only two members who spoke at the lighting — McCarthy and LaMalfa — mentioned that Christmas celebrates the birth of Christ.

"Christmas is a time to celebrate the birth of Jesus Christ and the blessing of God's love for all of us, the greatest gift we could ever receive," said McCarthy.

"I rejoice in the reason for the season: the birth of our savior Jesus Christ," said LaMalfa.

Noting that the tree had been cut in a national forest, Huffman paid tribute to government-owned lands.

"This year's tree is a symbol of the beauty and the importance of our nation's public lands. And it's a reminder of our responsibility to conserve public lands so everyone, including future generations, can continue to enjoy them," he said.

Pelosi herself did not mention the birth of Jesus but she did mention God. "Let us give thanks," she said, "for the many blessings which God has bestowed upon us in which we rejoice this holiday season, especially a miracle vaccine, the miracle vaccines that will allow us to safely be with loved ones." 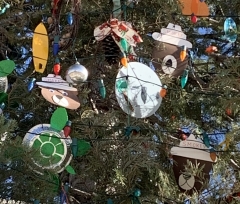 But when I visited the tree this week, I could see no ornament that made any clear reference to the birth of Christ.

A Forest Service webpage that had requested Californians make the ornaments for this tree laid down a rule: "U.S. Capitol Christmas Tree ornaments and tree skirts may not include logos, political, or religious affiliation or symbols, drug or alcohol references, be divisive or offensive."

But they did call it a "Christmas" tree.