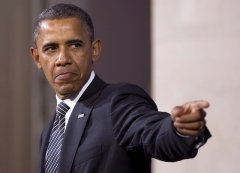 As of today--Jan. 1, 2014--a Democratic administration led by President Barack Obama will use a regulation permitted and funded by a Republican-majority House of Representatives to prohibit Americans from freely exercising not just Christianity, but virtue itself in the United States of America.

The Merriam-Webster dictionary defines virtue as “conformity to a standard of right”--and, in truth, there is only one such standard. Individuals are born and die, nations rise and fall--yet it remains.

Nor can it be escaped--no matter how devoutly men such as Obama seek to annul it, or how abjectly his opponents in the political establishment shrink from defending it.

What is it? The Roman senator Cicero explained it with force and clarity five decades before Christ.

“There is a true law, a right reason, conformable to nature, universal, unchangeable, eternal, whose commands urge us to duty, and whose prohibitions restrain us from evil,” wrote Cicero.

“God himself is its author, its promulgator, its enforcer,” said this Roman senator. “He who obeys it not, flies from himself, and does violence to the very nature of man.”

“When a man is inspired by virtue such as this, what bribes can you offer him, what treasures, what thrones, what empires?” wrote Cicero. “He considers these but mortal goods and esteems his own divine.”

“And,” concluded this pre-Christian statesman, “if the ingratitude of the people, and the envy of his competitors, or the violence of powerful enemies despoil his virtue of its earthly recompense, he still enjoys a thousand consolations in the approbation of conscience, and sustains himself by contemplating the beauty of moral rectitude.”

Our Founding Fathers believed precisely this when they founded the United States.

Before Thomas Jefferson wrote the Declaration of Independence, an 18-year-old Alexander Hamilton wrote: “Good and wise men, in all ages, have … supposed that the Deity, from the relations we stand in to Himself and to each other, has constituted an eternal and immutable law, which is indispensably obligatory upon all mankind prior to any human institution whatsoever”

“Upon this law depend the natural rights of mankind,” said Hamilton.

“They are written,” he concluded, “as with a sunbeam, in the whole volume of human nature, by the hand of the Divinity itself, and can never be erased or obscured by mortal power.”

When Jefferson stated that all men “are endowed by their Creator with certain unalienable Rights” and that governments are created to protect those rights, he was echoing both Cicero and the common view of his countrymen.

“Neither aiming at originality of principle or sentiment, nor yet copied from any particular and previous writing, it was intended to be an expression of the American mind, and to give to that expression the proper tone and spirit called for by the occasion,” Jefferson wrote, explaining the Declaration, in a letter he wrote in 1825. “All its authority rests then on the harmonizing sentiments of the day, whether expressed in conversation, in letters, printed essays, or in the elementary books of public right, as Aristotle, Cicero, Locke, Sidney, etc.”

Today, the Patient Protection and Affordable Care Act's ironically entitled “individual responsibility requirement” takes effect--at least so far as the letter of the law is concerned. It says that almost all Americans must “maintain minimum essential coverage” for health insurance for themselves and their dependents or be penalized by the government.

This “minimum essential coverage” includes a “preventive services” regulation, which has been defined by the Obama administration to require co-pay-free coverage for sterilizations as well as drugs and intrauterine devices that cause abortions.

Quite literally, under this regulation, a mother can be forced through her insurance coverage to provide her daughter with the drug that kills her granddaughter.

To deliberately terminate the life of an innocent human being, or to be complicit in that act, is to violate the unchanging moral law that even pagans such as Cicero recognized and understood. A government that forces individuals into complicity with the taking of innocent life is fully breaking faith with the purpose of government: It violates the God-given rights to life, liberty and the pursuit of happiness.

Virtue--living by our Creator's unchanging law—requires Americans, like all those before us, to respect life.

Under President Obama, that now violates a federal regulation