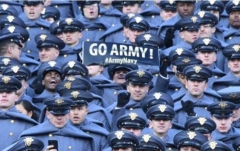 Two things — a war and a virus — almost stopped Americans from playing football in 1918. Both failed.

The Brooklyn Daily Standard Union ran a piece at the top of its sports page on Sept. 13, 1918 that summed up the war situation.

"With Gen. Pershing," it said, "leading our brave American boys in a triumphant march to Berlin ... while a second army of over 13,000,000 red-blooded Americans was being formed at home yesterday to back up the boys who have started what will be the final end of the Kaiser and Kaiserism for all time, who cares anything about football?"

Influenza outbreaks, meanwhile, had first been noted in March of that year, according to the Centers for Disease Control and Prevention.

In the fall, they came back with a vengeance.

"Between September and November, a second wave of flu peaks in the United States," says a CDC timeline of the 1918 pandemic. "This second wave is highly fatal, and responsible for most of the deaths attributed to the pandemic."

So, what happened to the 1918 football season?

Newspapers nationwide ran headlines on Sept. 13, 1918, suggesting football was dead for the year.

"Call Off Football This Year, Says U.S.," read the headline in the San Francisco Examiner.

"Government Asks Football Be Dropped," said the headline in the Minneapolis Star Tribune.

"The possibility of the complete suspension of football in all important colleges and universities in the country as a war measure loomed up strongly tonight as a result of the War Department request that no fall gridiron schedules be arranged by educational institutions having student army training corps," explained a story published in The New York Sun and many other papers that day.

"There are four hundred universities and colleges scattered through the country with student corps," it said.

"Officials of the University of Chicago said the War Department request undoubtedly means that all spare time of the students will be devoted to military instruction instead of athletics and that there would be no time for the development of football," said the report.

But the American football community did not accept this.

Among those who opposed canceling the 1918 season was the University of Chicago's own great coach, Amos Alonzo Stagg.

"I can see no reason for the suspension of the sport," Stagg said in the article.

"Football undoubtedly would make better officers," he said. "Every member of the 1916 University of Minnesota eleven, both regular and substitute, is an officer in the army, and each is giving a good account of himself in France.

The very next day, newspapers ran headlines saying the War Department did not in fact want to cancel football season.

"Football programmes for this fall at colleges and universities with army student training corps units will not be interrupted by the War Department, except where they actually would interfere with military training," said the story.

"Protests which began to reach members of Congress yesterday against the action of an officer of the training corps service in advising that football schedules be abandoned drew an official statement from the War Department today that no such step had been authorized," it said.

The War Department did end up putting travel restrictions on college football teams that caused some major games to be canceled — but not the entire season.

But that did not end the pandemic.

"The end of World War I," says the CDC timeline, "enables a resurgence of influenza as people celebrate Armistice Day and soldiers begin to demobilize."

On Sept. 28, 1918 both Army and Notre Dame had played their opening games. But some college games had been canceled.

"In the West," the Sun reported that day, "the influenza epidemic has caused some of the colleges to cancel their engagements and order a quarantine."

In October, it grew worse.

"Football schedules of the middle west again will be upset tomorrow as the result of Spanish influenza which has caused cancellation of virtually all games," the Des Moines Register reported on Oct. 19, 1918.

"Health authorities, fighting to check the spread of the disease caused some of the games to be called off, while others were cancelled on orders of college authorities," the paper said.

Yet America did not give up on the 1918 season.

On Nov. 23, 1918, the Sun ran the headline "Football Galore on Local Fields." It also listed a number of college games that would be played that day elsewhere in the nation. These included Pitt versus Georgia Tech in Pittsburgh and Michigan versus the Michigan Aggies in Ann Arbor.

Five days later — on Thanksgiving — the paper's headline was: "Feast of Football This 'Turkey' Day." Among the games scheduled for that day were Wisconsin versus the Michigan Aggies in Madison and Notre Dame versus Nebraska in Lincoln.

The Cornhuskers played the Irish to a scoreless tie.

But that Thanksgiving was a great comeback for America.