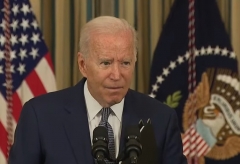 (CNSNews.com) - President Joe Biden has changed his position on the basic scientific fact of whether human life begins at conception.

The science is unalterable: At conception a new and genetically unique human being begins his or her life.

In the vice presidential debate that Biden had with then-Rep. Paul Ryan of Wisconsin on Oct. 12, 2012, Biden said that he accepted the fact that life begins at conception—but insisted on characterizing that scientific fact as “the church’s judgment.”

“With regard to abortion, I accept my church's position on abortion as a, what we call, a de fide doctrine. Life begins at conception in the church's judgment. I accept it in my personal life,” said Biden.

But at a press conference today—Sept. 2, 2021—Biden said that he does not agree that life begins at conception.

The American College of Pediatricians has a page on its website explaining when “When Human Life Begins.” It says: “The predominance of human biological research confirms that human life begins at conception—fertilization.  At fertilization, the human being emerges as a whole, genetically distinct, individuated zygotic living human organism, a member of the species Homo sapiens, needing only the proper environment in order to grow and develop. The difference between the individual in its adult stage and in its zygotic stage is one of form, not nature.”