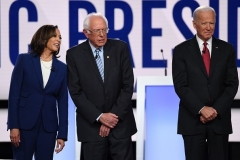 Joe Biden did not look to his right for a running mate. He picked someone whose policy prescriptions — like his own — are unambiguously on the left.

On Tuesday afternoon, Biden tweeted that he had chosen Sen. Kamala Harris of California to be the Democratic nominee for vice president.

"I have the great honor to announce that I've picked @KamalaHarris — a fearless fighter for the little guy, and one of the country's finest public servants — as my running mate," Biden said.

"Congratulations to @KamalaHarris, who will make history as our next Vice President," said Sanders.

"She understands what it takes to stand up for working people, fight for health care for all, and take down the most corrupt administration in history," Sanders said.

Why would a self-proclaimed socialist like Sanders be so happy that Biden had picked Harris as his running mate? It is obvious: Harris shares Sanders' values.

Sanders should know this from firsthand experience.

On April 10, 2019, Sanders reintroduced his "Medicare for All" Act in the current Congress. This bill is designed to completely socialize America's health care system. It makes the federal government the primary health care payer and prohibits private health insurance companies from competing with the government.

Harris had co-sponsored Sanders' socialized medicine plan in the Congress that convened in 2017 — and again in 2019.

"Every individual who is a resident of the United States is entitled to benefits for health care services under this Act," says this proposed law co-sponsored by Sanders and Harris.

Four months later, as reported by the Daily Beast, Harris — in the heat of the Democratic primary campaign — walked back from this bill she had co-sponsored with her socialist colleague. She did it, the Daily Beast reported, in a talk with "wealthy donors" at "a fundraiser in the Hamptons."

"And I support Medicare for All," Harris said, according to the Daily Beast. "But as you may have noticed, over the course of the many months, I've not been comfortable with Bernie's plan, the Medicare for all plan."

Harris subsequently proposed her own Medicare for All plan that allows private insurance to continue.

But she has also taken far-left positions on other issues related to health care.

She not only promised to appoint "transgender" people to "leadership roles" in her own presidential administration, but she also argued that "transition-related care" needed to be part of "comprehensive health care."

"And I will be intentional about appointing LGBTQ+ people — including transgender and gender non-conforming individuals — to leadership roles throughout my administration, from my cabinet to the federal bench and beyond," Harris said in an op-ed published on Nov. 1, 2019, in the Las Vegas Spectrum, which describes itself as a "news magazine geared to the LGBTQ and progressive community."

Does her commitment to appoint "transgender" individuals to her cabinet mean she would advocate for a biological male who says he is a female to be nominated to Biden's cabinet?

Would she advocate that a biological male who says he is female be appointed secretary of state? Secretary of defense?

What does she mean by "comprehensive reproductive services?

During her presidential campaign, Harris proposed what she called the Reproductive Rights Act. It would require states that Harris believed had a "history of violating Roe v. Wade to have all news laws and regulations regarding abortion pre-approved by the federal Justice Department."

"Harris will require, for the first time, that states and localities with a history of violating Roe v. Wade obtain approval from her Department of Justice before any abortion law or practice can take effect," said an explanation on her campaign website.

The Hyde Amendment prohibits federal funds from being used to pay for an abortion except in cases of rape, incest or when the mother's life is in danger.

Seventy-seven-year-old Joe Biden's vice presidential candidate would have federal taxpayers fund a Medicare for All system in a country where the federal government would cover "transition-related care" for transgenders and abortion on demand.

This is what Biden calls "a fearless fighter for the little guy."