Judging in the Judiciary Committee 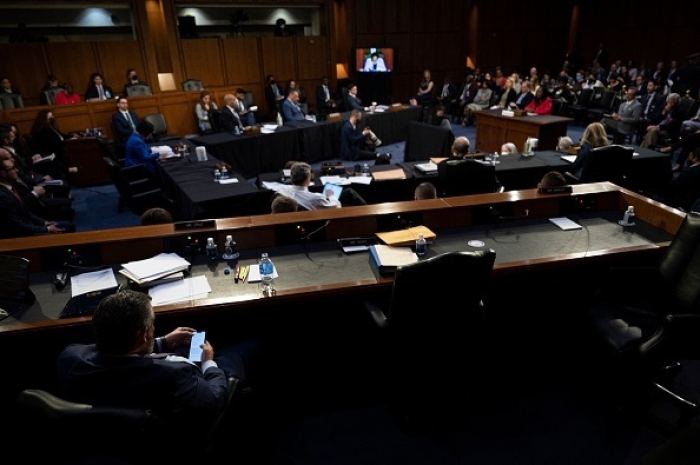 When Democratic Sen. Amy Klobuchar of Minnesota questioned Judge Ketanji Brown Jackson at her Supreme Court confirmation hearing on Tuesday afternoon, Republican Sen. Lindsey Graham of South Carolina and Democratic Sen. Patrick Leahy of Vermont proved they have something in common in addition to being members of the Senate Judiciary Committee.

Neither of them was in the hearing room.

Yet that did not necessarily make them outliers on the committee.

A number of senators on the committee did not stay in the room to personally witness Klobuchar's questioning of Jackson.

Democratic Sens. Dianne Feinstein of California and Cory Booker of New Jersey were also out of the room. So, too, were Republican Sens. Mike Lee of Utah, Josh Hawley of Missouri and Tom Cotton of Arkansas.

Other senators on the committee departed from the proceedings while other colleagues were questioning Jackson.

Clearly, senators on the Judiciary Committee did not deem it vitally important to personally listen to every word Jackson uttered during her confirmation hearings.

Their decisions on whether to confirm her are unlikely to turn on anything she says or does at her confirmation hearing.

So, what will determine their vote?

Republican Sen. John Cornyn of Texas had a particularly interesting exchange with Jackson on the topic of substantive due process.

The term "due process" can be found in the Fifth and 14th Amendments.

On their face, these constitutional provisions would seem to be aimed at protecting, among other things, the right to life.

In recent times, however, the court has found them to provide something quite the opposite.

In the 1965 case of Griswold v. Connecticut, the Supreme Court reviewed a Connecticut law that banned contraception. The court voted 7-2 against the law in order to protect what it described as a "right of privacy older than the Bill of Rights."

That set the stage for Roe v. Wade.

Justice Hugo Black, who had been nominated by Democratic President Franklin Roosevelt, was one of the dissenters in Griswold.

In his questioning of Jackson, Cornyn quoted from Black's dissent in that case.

"The adoption of such a loose, flexible, uncontrolled standard for holding laws unconstitutional, if ever it is finally achieved, will amount to a great unconstitutional shift of power to the courts which I believe and am constrained to say will be bad for the courts, and worse for the country," Black said.

After reciting this quote from Black, Cornyn asked Jackson, "Why isn't substantive due process just another way for judges to hide their policy making under the guise of interpreting the Constitution?"

"Well, senator, the justices have interpreted the Due Process Clause of the 14th Amendment to include a substantive provision, the rights to due process," said Jackson.

"They have interpreted that to mean not just procedural rights relative to government action, but also the protection of certain personal rights related to intimacy and autonomy," she continued.

One cannot necessarily conclude that in making this statement Jackson was personally endorsing "the right to an abortion" — as opposed to simply explaining that that is what the court had done.

However, Jackson also did not expressly reject it.

Had President Joe Biden believed there was any chance Jackson would vote to overturn Roe v. Wade, he would not have nominated her to the Supreme Court.

If the Democrats on the Senate Judiciary Committee believed there was any chance Jackson would vote to overturn Roe v. Wade, they would not be supporting her confirmation.

They are not at all worried about which way she will go on the right to life. They believe she will follow in the footsteps of Justice Stephen Breyer, whom she served as a clerk and whom she has been nominated to replace.

In the 2007 case of Gonzales v. Carhart, which tested the constitutionality of a federal ban on partial-birth abortion, Breyer joined Justice Ruth Bader Ginsburg's dissenting opinion.

"In sum, the notion that the Partial-Birth Abortion Ban Act furthers any legitimate governmental interest is, quite simply, irrational," they said.

In sum: Jackson clerked for and will now almost assuredly replace a justice who held that it is "irrational" to protect the life of a partially born baby.