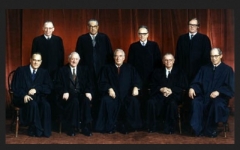 When Blackmun's nomination came up for a vote, Democratic Sen. John McClellan of Arkansas made the case for confirmation.

"He does not believe it is either the duty or the prerogative of the Court to change the historical interpretations of the Constitution so as to be tantamount to amending that great document by edicts and decree," said McClellan. "For these basic principles of judicial integrity, I commend him and respect him."

McClellan then quoted a statement Blackmun had made during the confirmation process about how important the Supreme Court was to "little persons."

"What comes through to me most clearly is the utter respect which the little person has for the Supreme Court of the United States, and I think that the little person feels this is the real bastion of freedom and protection of strength in this nation," Blackmun had said, according to the Congressional Record.

"It was a lesson that was taught to me in the last two weeks and one which I think I shall not forget," said Blackmun.

Three years later, Blackmun wrote the court's opinion in Roe v. Wade. It declared there was a constitutional "right to privacy" that included the right to kill what could be called "little persons" — unborn babies — in the womb.

In his opinion in Roe, Blackmun pushed aside what he called "the theory" that life begins at conception that was advanced by those who supported banning abortion.

"Some of the argument for this justification rests on the theory that a new human life is present from the moment of conception. The State's interest and general obligation to protect life then extends, it is argued, to prenatal life," said Blackmun.

"There has always been strong support for the view that life does not begin until live birth," Blackmun wrote. "This was the belief of the Stoics."

"In areas other than criminal abortion, the law has been reluctant to endorse any theory that life, as we recognize it, begins before live birth or to accord legal rights to the unborn except in narrowly defined situations and except when the rights are contingent upon live birth," he said.

"In short," Blackmun, "the unborn have never been recognized in the law as persons in the whole sense."

"We need not resolve the difficult question of when life begins," he concluded.

Wrong. The answer to that question, which science had already unambiguously determined, should have been embraced by the court. Human life begins at conception. Killing a human being any time after that is exactly that: killing a human being.

"This right of privacy," Blackmun wrote, "whether it is founded in the Fourteenth Amendment's concept of personal liberty and restrictions upon state action, as we feel it is, or, as the District Court determined, in the Ninth Amendment's reservation of rights to the people, is broad enough to encompass a woman's decision whether or not to terminate her pregnancy."

But then Blackmun appeared to open a narrow avenue for some regulation of abortion.

"Logically, of course, a legitimate state interest in this area need not stand or fall on acceptance of the belief that life begins at conception or at some other point prior to live birth," he wrote. "In assessing the State's interest, recognition may be given to the less rigid claim that as long as at least potential life is involved, the State may assert interests beyond the protection of the pregnant woman alone."

He then concluded that states could regulate or even prohibit abortion after "viability" except when killing the unborn baby was "necessary to preserve the life or health of the mother."

There were two problems with this: 1) "viability" (the point at which a baby can survive outside the womb) is determined not by the baby's inalterable humanity but by advances in medical science; and 2) the "health" of the mother, as defined by Blackmun himself in Roe's companion case of Doe v. Bolton, is anything her doctor says it is.

In that case, Blackmun declared that "the medical judgment" about whether a woman's health justified an abortion "may be exercised in the light of all factors — physical, emotional, psychological, familial, and the women's age — relevant to the well-being of the patient."

Blackmun was not the only justice who voted in 1973 to declare abortion a "right." He was joined in his Roe opinion by Chief Justice Warren Burger and Justices William Douglas, William Brennan, Potter Stewart, Thurgood Marshall and Lewis Powell.

This year, the killing has continued. But the Supreme Court now has a chance to reverse Roe v. Wade. Will Chief Justice John Roberts and Justices Brett Kavanaugh and Amy Barrett stand with Blackmun — or with the innocent unborn?