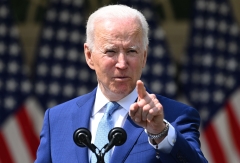 It adopted Biden's typical class-war rhetoric, claiming to protect the incomes of middle-class Americans, while increasing taxes on corporations and the "rich."

"President Biden's plan would give tax relief to tens of millions of families — continuing the tax relief families are seeing this Tax Day — and he'd apply new minimum taxes on billionaires and large corporations to make sure they're paying their fair share," said a statement issued by the White House.

The truth: The Biden Administration is already collecting taxes at a faster pace than any previous administration.

But that is not enough for Biden.

In Biden's fiscal vision, the federal government will never see another year when its deficit is less than $1 trillion.

"The President believes that profitable corporations shouldn't pay a lower tax bill than a middle-class family, and shouldn't be able to avoid taxes by shipping jobs and profits overseas," said the statement the White House issued on Monday. "The President is championing a 15 percent corporate minimum tax here and around the world to ensure that no large profitable corporation gets away with paying $0 in taxes and reversing the massive 2017 Republican tax cuts, by increasing the corporate tax rate to 28 percent."

But then, in fiscal 2021, corporation income tax revenues climbed to $371.8 billion, which exceeded what they had been in the last two years before the rate was cut.

If Biden were to succeed in increasing the corporation income tax to 28%, it would impose increased costs on every American consumer who purchases products — with their own after-tax income — from the corporations Biden targets.

If Biden increases the federal tax on corporations that make automobiles, it will increase the prices Americans pay for cars.

If Biden increases the federal tax on corporations that produce food products and own grocery stores, it will increase what Americans must pay to feed their families.