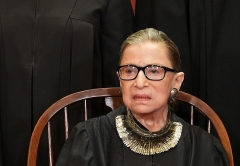 Associate Justice Ruth Bader Ginsburg poses for the official photo at the Supreme Court on November 30, 2018. (Photo by MANDEL NGAN/AFP via Getty Images)

In the 2000 case of Stenberg v. Carhart, the Supreme Court considered whether a state could prohibit partial-birth abortion.

What is a partial-birth abortion?

Justice Clarence Thomas answered that with clinical clarity in his dissenting opinion.

"After dilating the cervix, the physician will grab the fetus by its feet and pull the fetal body out of the uterus into the vaginal cavity," Thomas wrote.

"Assuming the physician has performed the dilation procedure correctly, the head will be held inside the uterus by the women's cervix," he said.

"While the fetus is stuck in this position, dangling partly out of the woman's body, and just a few inches from a completed birth, the physician uses an instrument such as a pair of scissors to tear or perforate the skull," he said.

"The physician will then either crush the skull or will use a vacuum to remove the brain and other intracranial contents from the fetal skull, collapse the fetus' head, and pull the fetus from the uterus," Thomas said.

In her own opinion, concurring in the court's judgment that it was unconstitutional for states to ban partial-birth abortion, Ginsburg did not contest Thomas's description. But she mocked what she called the "emotional uproar" the procedure caused.

"I write separately to stress that amidst all the emotional uproar caused by an abortion case, we should not lose sight of the character of Nebraska's 'partial birth abortion' law," said Ginsburg.

And what was that character?

To explain it, she cited Judge Richard Posner of the U.S. Court of Appeals for the 7th Circuit. He had argued, she said, that "the law prohibits the procedure because the state legislators seek to chip away at the private choice shielded by Roe v. Wade."

In order to stop this effort to "chip away" at Roe v. Wade, Ginsburg defended ripping babies feet first from their mothers' wombs, sticking scissors in their heads and vacuuming out their brains as a methodology of abortion.

"A state regulation that 'has the purpose or effect of placing a substantial obstacle in the path of a woman seeking an abortion of a nonviable fetus' violates the Constitution," she concluded in Stenberg.

Seven years later, in Gonzales v. Carhart, the Supreme Court considered whether the federal government could ban partial-birth abortion. This time, the court's majority ruled in favor of the ban.

"Today's decision is alarming," Ginsburg said in her Gonzales dissent.

How could any rational person conclude that the government had an interest in stopping doctors from jamming scissors into the skulls of partially born babies?

"In sum," Ginsburg concluded, "the notion that the Partial-Birth Abortion Ban Act furthers any legitimate governmental interest is, quite simply, irrational."

In the 2014 case of Burwell v. Hobby Lobby, Ginsburg wrote a dissent arguing that the government could force a family-owned business to engage in activities that violated the religious convictions of its owners. In this case, the specific act was providing insurance coverage for the abortion-inducing drugs and devices required by regulations issued under the Affordable Care Act.

At that time, Ginsburg argued that only religious organizations could be exempted from government regulations that required the administrators or operators to violate their religious convictions.

"I would confine religious exemptions under the Act to organizations formed 'for a religious purpose,' 'engage(d) primarily in carrying out that religious purpose,' and not 'engaged ... substantially in the exchange of goods and services for money beyond nominal amounts,'" she wrote.

Why should the government allow anyone to act in accordance with their religious principles while engaging in commercial enterprises?

Then, in the last opinion she ever wrote, Ginsburg took aim at the Little Sisters of the Poor because they desired not to be complicit in the distribution of contraceptives, including abortion-inducing drugs and devices.

The question in the case of Little Sisters of the Poor Saints Peter and Paul Home vs. Pennsylvania was whether a new Affordable Care Act regulation issued by the Trump administration was permissible under the law itself. The regulation provided broad religious and moral exemptions to the existing regulation requiring health insurance plans to cover contraceptives, including abortion-inducing drugs and devices.

The court ruled that the new regulation was permissible. Ginsburg dissented.

"Today, for the first time, the Court casts totally aside countervailing rights and interests in its zeal to secure religious rights to the nth degree," wrote Ginsburg.

What were the "countervailing rights and interests" the court was casting aside to protect the religious liberty of the Little Sisters of the Poor and other Americans?

"(T)his Court leaves women workers to fend for themselves, to seek contraceptive coverage from sources other than their employer's insurer, and, absent another available source of funding, to pay for contraceptive services out of their own pockets," wrote Ginsburg.

"The Constitution's Free Exercise Clause, all agree, does not call for that imbalanced result," she concluded.

In Ginsburg's view, the federal government had a duty to force Catholic nuns to violate their religious beliefs in order to make sure their lay female employees did not have to pay for their own contraceptives.