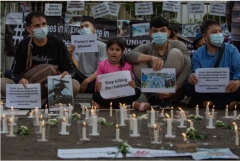 Refugees from the Shiite Hazara community in Kabul, Afghanistan, carry placards in Indonesia to show solidarity with the victims of the bombing in front of the Sayed ul-Shuhada school in Kabul. (Photo by Afriadi Hikmal/NurPhoto via Getty Images)

The annual threat assessment that the Office of the Director of National Intelligence released this April did not present an optimistic vision for the future of Afghanistan.

"The Taliban is likely to make gains on the battlefield, and the Afghan Government will struggle to hold the Taliban at bay if the coalition withdraws support," the assessment said.

"Kabul continues to face setbacks on the battlefield," it said, "and the Taliban is confident it can achieve military victory."

Just five days after the ODNI published this assessment, President Joe Biden addressed the nation on his plans for Afghanistan.

"I have concluded that it's time to end America's longest war," Biden said.

He then noted that former President Donald Trump had negotiated an agreement with the Taliban to be out of that country by May 1 of this year.

"So, in keeping with that agreement and with our national interests, the United States will begin our final withdrawal — begin it on May 1 of this year," Biden said.

"We will not conduct a hasty rush to the exit," said Biden. "We'll do it responsibly, deliberately, and safely."

That is not what transpired.

On April 30, one day before the U.S. withdrawal was set to begin, terrorists attacked a building where Afghan students were staying in Logar Province, which is south of Kabul.

"A truck bomb exploded in front of a guesthouse in which a group of students were preparing for university entrance exams, killing 27 civilians and wounding 107 civilians and three security forces," the New York Times reported. "The explosion was massive, the regional hospital, the guesthouse and many other buildings in the area were damaged."

Afghan President Ashraf Ghani, who has since fled the country, blamed this attack on the Taliban. "The Taliban have once again shown that they are not only unwilling to resolve the current crisis peacefully and fundamentally, but are complicating the situation and wasting the opportunity for peace," Ghani said in a statement quoted by Agence France Presse.

Eight days later, a car pulled up in front the Sayed ul-Shuhada school in a predominately Shiite neighborhood in Kabul. In the afternoons, this was an all-girls school. The car arrived in the afternoon.

A report published May 8 by the New York Times described what happened then. "Sayed Ahmad Hussaini had arrived to pick up his two daughters and saw a man sitting in a Toyota sedan parked outside the school and shaking from what he thought was nervousness," the Times reported. "Mr. Hussaini said he asked the man what he was doing. 'None of your business,' the man in the car replied. Moments later, the car exploded, Mr. Hussaini said."

Then two more bombs went off.

The National, an English-language news site based in the United Arab Emirates, interviewed the principal of the school. She described a horrendous scene.

"I saw students without limbs, bodies without a head, bodies there were burned," she said. "I saw pieces of my students scattered all around me."

"The two teachers with me who were helping the victims of the first two blasts were also injured in the third explosion," she said.

The U.S. government pointed to ISIS — not the Taliban — as the perpetrators of this attack.

"ISIS remains a potent force here — that is among many reasons why we continue to provide security and counter-terrorism assistance to the Afghan authorities," Ross Wilson, the State Department's charge d'affaires in Afghanistan, told Agence France Presse on May 19.

"The school bombing and the mosque bombing that took place a few days later pretty clearly appeared to be the work of the so-called Islamic State," he said.

Zalmay Khalilzad, the U.S. Special Representative for Afghanistan Reconciliation, reiterated this conclusion in testimony he presented on May 20 to the House Oversight and Reform Subcommittee on National Security.

"I want to take a moment to acknowledge the tremendous loss following the recent attacks on a girl's school near Kabul," Khalilzad told the committee. "This was a deeply shocking incident; it appears that ISIS was responsible. But ultimately, it is the ongoing violence and chaos that makes such attacks possible."

The Congressional Research Service on Aug. 17 updated its report on "Terrorists Groups in Afghanistan." One of these is "Islamic State-Khorasan Province," or "ISKP."

"In addition to attacks against government targets, ISKP has claimed numerous large-scale bombings against civilians, mainly targeting Afghanistan's Shia minority, including its May 2021 bombing of a girls' school in Kabul," the report said.

Twenty years ago, the United States justly and correctly invaded Afghanistan, targeting the Al Qaeda terrorist organization responsible for the Sept. 11, 2001, attacks. We still have an interest in making sure Afghanistan does not once again become a sanctuary for terrorists seeking to attack this country.

But it was a mistake to think the United States could remake Afghanistan.