US Trade Deficit With Communist China Is Climbing 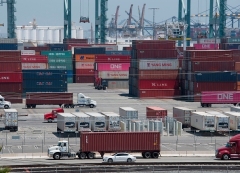 Shipping containers from China and Asia are unloaded at the Long Beach port, California. (Photo by MARK RALSTON/AFP via Getty Images)

At the White House press briefing last Dec. 6, press secretary Jen Psaki made it clear that President Joe Biden wanted the People's Republic of China to pay a price for its human rights abuses.

He would do so by declining to send any U.S. government officials to the Beijing Winter Olympics, which would be held in February.

"The Biden administration," Psaki said, "will not send any diplomatic or official representation to the Beijing 2022 Winter Olympics and Paralympic Games given the PRC's ongoing genocide and crimes against humanity in Xinjiang and other human rights abuses."

"U.S. diplomatic or official representation would treat these games as business as usual in the face of the PRC's egregious human rights abuses and atrocities in Xinjiang," she said. "And we simply can't do that."

But business as usual with the PRC did continue in the business arena, if not the Olympic one.

In fact, in the days leading up to and through the Beijing Olympics, U.S. imports from China increased.

In the first three months of this year, America's cumulative merchandise trade deficit with China was $101,036,100,000.

We are on our way to running an annual merchandise trade deficit with China that will exceed $400 billion.

This is not free trade. It is subsidizing a tyrant.

"The People's Republic of China is an authoritarian state in which the Chinese Communist Party is the paramount authority," it said. "Communist Party members hold almost all top government and security apparatus positions."

"Genocide and crimes against humanity occurred during the year against predominantly Muslim Uyghurs and members of other ethnic and religious minority groups in Xinjiang," said the State Department.

"Significant human rights issues," said the State Department, "included credible reports of: arbitrary or unlawful killings by the government; forced disappearances by the government; torture by the government ... serious restrictions on free expression and media, including physical attacks on and criminal prosecution of journalists, lawyers, writers, bloggers, dissidents ..."

"Moreover," the U.S. Commission on International Religious Freedom said in its own 2022 annual report, "authorities throughout China routinely raided churches, detained Christians, and confiscated religious materials. The government also continued to demolish church buildings and crosses — including the Sacred Heart Catholic Church in Xinjiang — under its 'sinicization of religion' campaign."

This year's Annual Threat Assessment, published by the Office of the Director of National Intelligence, indicated that China is seeking "a world-class military that will enable it to ... project power globally while offsetting perceived U.S. military superiority."

"Beijing," says the assessment, "is accelerating the development of key capabilities it believes the People's Liberation Army (PLA) needs to confront the United States in a large-scale, sustained conflict."

China is developing not only its traditional military capability but also its cyber-sector capability.

"China almost certainly is capable of launching cyber attacks that would disrupt critical infrastructure services within the United States, including against oil and gas pipelines and rail systems," says the threat assessment.

"China will remain the top threat to U.S. technological competiveness as Beijing targets key sectors and proprietary commercial and military technology from U.S. and allied companies and institutions," says the assessment. "Beijing uses a variety of tools, from public investment to espionage to advance its technological capabilities.

"Beijing's willingness to use espionage, subsidies, and trade policy to give its firms a competitive advantage represents not just an ongoing challenge for the U.S. economy and its workers, but also advances Beijing's ability to assume leadership of the world's technological advancement and standards," says the threat assessment.

Our trade policies and practices are now sending Communist China — which commits genocide and attacks the freedoms of speech and religion — tens of billions of dollars every month.

But at least no U.S. diplomats attended any Olympic event.