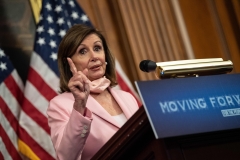 U.S. House Speaker Nancy Pelosi speaks during the unveiling of the Moving Forward Act, legislation to rebuild the country's infrastructure, at the US Capitol in Washington, DC, on June 18, 2020. (Photo credit: NICHOLAS KAMM/AFP via Getty Images)

The word "unsustainable" is often used by politicians and bureaucrats in Washington, D.C., when they are talking about — rather than acting on — the federal debt.

Such was the case when then-acting Office of Management and Budget director Russell Vought appeared in the House Budget Committee on March 12, 2019, to talk about President Donald Trump's budget proposal for fiscal 2020.

"The national debt nearly doubled under the previous administration and is now more than $22 trillion," Vought said.

"This level of debt is unsustainable and threatens the prosperity and economic freedom of future generations," he warned.

"The president's commitment to fiscal responsibility has been outlined in previous budgets and again today he is requesting more reductions to both discretionary and mandatory spending than any other president in history," Vought said.

Fiscal 2019 ended six-and-a-half months after the Office of Management and Budget director delivered this testimony about the president's plans for fiscal 2020. During fiscal 2019, it turned out, the federal government spent $4,446,584,000,000.

Even when the historical spending numbers were adjusted for inflation, that was the most the federal government had ever spent in any fiscal year.

In one year — when the White House Office of Management and Budget was saying the debt was already "unsustainable" — the federal debt climbed more than $1.2 trillion.

In February, the COVID-19 pandemic hit. In March, Congress passed and Trump signed the Coronavirus Aid, Relief and Economic Security Act to combat the virus and provide Americans with economic relief for the recession it caused. That act alone, according to the Congressional Budget Office, would add $1.7 trillion to the deficit over 10 years.

That remains true even when federal spending for all previous fiscal years is adjusted for inflation into June 2020 dollars.

Thus, every additional penny the federal government spends in the remainder of this fiscal year will simply add to the new record that has already been set.

Thus, in the first three quarters of this fiscal year, the debt increased by more than $3.75 trillion.

That is more than the $3.23 trillion in debt the federal government accumulated in the 214 years between the signing of the Declaration of Independence and the end of fiscal 1990.

Much of that debt, of course, was spurred by the coronavirus relief bill Congress passed and Trump signed in March.

But now House Speaker Nancy Pelosi would like to see Congress enact the Health and Economic Recovery Omnibus Emergency Solutions Act, an additional COVID-19 relief bill that the Democrat-controlled House approved in May. According to the CBO's estimate, this bill would increase the deficit by $3.445 trillion.

Thus, with just one bill, Congress could increase the deficit by more than all the money the federal government borrowed in the first 214 years of this republic.

At a Monday press briefing, Pelosi defended the aspiration of the Democrat-controlled House to add trillions more to this year's already record spending.

"But why can't we spend trillions of dollars to bolster the middle class in our country?" Pelosi said.

If the speaker gets her way, Americans born this year will be paying interest on the additional trillions of dollars she hopes to add to the debt this year — for their entire working lives.

The virus has imposed a great cost on this country, but it will be defeated — through prudential behavior by private citizens, excellent health care provided by dedicated doctors and nurses, and the eventual discovery and mass manufacture of a safe and effective vaccine.

The malignancy is a federal government that is relentlessly growing into the dominant force in American life.

Future generations will look back and admire the courage and ingenuity their ancestors showed in containing COVID-19.

But they may also look at their federal tax bill and wonder why we did not do the same to government.

Terence P. Jeffrey is the editor in chief of CNSnews.com.