When Can Government Kick Open the Door of Your House? 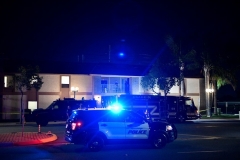 A 69-year-old woman was walking her poodle in a public park in Northern California in late November. She was not wearing a mask.

She walked by groups of people who were.

A police officer, meanwhile, monitored her movements from the security of his squad car.

As she moved past the park into a middle-class neighborhood, he clandestinely trailed her. She walked past other people who were also out for strolls — sometimes coming within three or four feet of them.

Being friendly neighbors, they nodded and smiled.

Then this dog walker turned into a driveway. The police officer turned on his overhead lights and pulled up as fast as he could to the front of her house.

By the time he got out of his car, she was already moving through her front door. Before she could completely shut it, however, he slammed his boot into it and knocked it open.

He then entered her foyer and asked her if she had even been carrying a mask on her walk. She said no.

He said, "You are under arrest."

This is not a true story. It is hypothetical. But is it so fantastical it could never happen?

Consider a true story now being pondered by the Supreme Court in the case of Lange v. California.

"One evening in October 2016, petitioner Arthur Lange was driving home in Sonoma, California," said the petition Lange's lawyers submitted to the Supreme Court asking it to take up his case.

"He was listening to loud music and at one point honked his horn a few times," said the petition.

In other words, the officer was following a driver he suspected may be committing $60 worth of traffic violations.

"At that point, Mr. Lange was about as far from his driveway as first base is from second," said the petition.

Lange pulled into his garage. But he did not make it safely home.

"As the garage door began to descend," said the petition, "Officer Weikert left his squad car, stuck his foot under the door to stop it from closing, and entered the garage."

The officer then discovered Lange might be responsible for more than just playing loud music and honking his horn.

"Upon entering the garage and questioning Lange, the officer observed signs of excessive intoxication, such as slurred speech," said the brief that then-California Attorney General Xavier Becerra submitted to the Supreme Court asking it not to take up this case.

Lange was given a blood test.

"Here, the Sonoma County District Attorney charged Lange with two misdemeanor violations of driving under the influence of alcohol ... and with an infraction for operating his car's sound system at an excessive level," said Becerra's brief. "Lange moved to suppress the evidence obtained after the officer entered Lange's garage, arguing that the officer had no justification to enter without a warrant."

Now, think of the hypothetical 69-year-old woman who walked her poodle without a mask. Was she a criminal?

On June 18, 2020, the California Department of Public Health issued a mask mandate under the authority of Gov. Gavin Newsom that said, in part: "People in California must wear face coverings when they are in the high-risk situations listed below: ... While outdoors in public spaces when maintaining a physical distance of 6 feet from persons who are not members of the same household or residence is not feasible."

The Los Angeles Times reported then: "Under state law, residents who violate the new requirement could be charged with a misdemeanor and potentially face a financial penalty, according to a representative for the Newsom administration."

On Nov. 16, 2020, the Newsom administration published an updated — and somewhat stricter — mandate.

"People in California must wear face coverings when they are outside of the home, unless one of the exemptions below applies," said the November update.

But did the government law enforcement agency that entered her hypothetical home — or Lange's actual garage — violate the Fourth Amendment? It says: "The right of the people to be secure in their persons, houses, papers, and effects, against unreasonable searches and seizures, shall not be violated, and no Warrants shall issue, but upon probable cause, supported by Oath or affirmation, and particularly describing the place to be searched, and the persons or things to be seized."

In a brief in Lange v. California that was joined by the American Conservative Union Foundation and the Cato Institute, the American Civil Liberties Union says: "By categorically permitting police officers to enter a home without a warrant whenever they pursue a suspect they have probable cause to arrest for a misdemeanor, the California Court of Appeal violated petitioner's Fourth Amendment rights."

This is the right position.

If a law enforcement officer suspects someone is driving under the influence — as opposed to playing loud music and honking his horn — he should pull him over immediately to protect both that person and the public.

But when a law enforcement agency wants to enter someone's home — other than to protect people there from a life-threatening emergency — it should get a judge to give it a warrant.