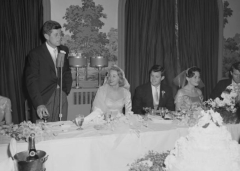 When Democratic Sen. Ted Kennedy of Massachusetts led the fight in 1996 to stop a federal law that would define marriage as the union of one man and one woman, he faced some prominent opponents in his own party.

The marriage issue came up that year because of a case working its way through the state courts in Hawaii. The issue there was whether the Hawaiian constitution protected a right to same-sex marriage.

If Hawaii's Supreme Court were to rule that this was the case, the other 49 states could have been forced by Article IV, Section 1 of the Constitution to recognize those marriages. That section says: "Full faith and credit shall be given in each state to the public acts, records, and judicial proceedings of every other state. And the Congress may by general laws prescribe the manner in which such acts, records, and proceedings shall be proved, and the effect thereof."

This bill was simple and straightforward. It would amend "the Federal judicial code to provide that no State, territory, or possession of the United States or Indian tribe shall be required to give effect to any marriage between persons of the same sex under the laws of any other such jurisdiction or to any right or claim arising from such relationship," said its official congressional summary.

It would establish, said the summary, "a Federal definition of: (1) 'marriage' as only a legal union between one man and one woman as husband and wife; and (2) 'spouse' as only a person of the opposite sex who is a husband or wife."

On July 9, 1996, the House Judiciary Committee submitted its report on the Defense of Marriage Act to the full House.

"The effort to redefine 'marriage' to extend to homosexual couples is a truly radical proposal that would fundamentally alter the institution of marriage," said the committee's report. "To understand why marriage should be preserved in its current form, one need only ask why it is that society recognizes the institution of marriage and grants married persons preferred legal status."

"At bottom," said the report, "civil society has an interest in maintaining and protecting the institution of heterosexual marriage because it has a deep and abiding interest in encouraging responsible procreation and child-rearing.

Nor did the committee ignore the moral significance of the debate.

"It is both inevitable and entirely appropriate that the law should reflect such moral judgments," it said. "H.R. 3396 serves the government's legitimate interest in protecting the traditional moral teachings reflected in heterosexual-only marriage laws."

When the Defense of Marriage Act came up for a vote on the House floor on July 12, 1996, Democratic Rep. Bill Lipinski, who was from Chicago, argued for it.

"The issue of homosexual marriage is a major concern to many Americans, and I feel that the time has come for Congress to take a stand," said Lipinski. "What we say today and how we vote on this bill (will) have both legal and moral ramifications for years to come. We cannot sit by and do nothing."

"Marriage is the foundation of our society; families are built on it and values are passed on through it," said Lipinski.

"Our Nation's moral fabric is based on this sacred institution," he said. "Homosexual marriages would destroy thousands of years of tradition which has upheld our society. Marriage has already been undermined by no-fault divorce, pregnancies out of wedlock, and sexual promiscuity. Allowing for gay marriages would be the final straw, it would devalue the love between a man and a woman and weaken us as a Nation."

After Lipinski and others had expressed their views on the Defense of Marriage Act, the House voted 342-67 to approve it. The House Democratic caucus itself voted 118-65 in its favor.

One of those 118 Democrats voting for it was Schumer, who two years later would win a seat in the Senate.

When the Senate took up the Defense of Marriage Act on Sept. 10, 1996, Democratic Sen. Ted Kennedy of Massachusetts led the opposition.

"I oppose the so-called Defense of Marriage Act, and I regret that the Senate is allocating scarce time at the end of this Congress to consider this unconstitutional, unnecessary, and divisive legislation," Kennedy said.

"We all know what is going on here," said Kennedy. "I regard this bill as a mean-spirited form of Republican legislative gay-bashing cynically calculated to try to inflame the public 8 weeks before the November 5 election."

"It is a cynical election year gimmick," Kennedy said, "and it deserves to be rejected by all who deplore the intolerance and incivility that have come to dominate our national debate."

Kennedy was unpersuasive. The Senate voted 85-14 to approve the act. One of the 85 who voted for it was Biden.

Clinton signed the bill at almost 1 a.m. on Saturday, Sept. 21, 1996. Then his reelection campaign began broadcasting a radio ad.

The Associated Press reported that "the Clinton campaign in its radio ad lists Clinton's signing of the Defense of Marriage Act as evidence that 'President Clinton has fought for our values and America is better for it."

In the 2015 case of Obergefell v. Hodges, Justice Anthony Kennedy wrote an absurd 5-4 Supreme Court opinion arguing that the 14th Amendment, ratified in 1868, had created a constitutional right to same-sex marriage.

Fearing the Supreme Court might reverse this opinion and adopt the position that Clinton, Biden and Schumer held in 1996, the House last week voted 267-157 to approve the so-called Respect for Marriage Act.

It essentially repeals the Defense of Marriage Act, removing "provisions that define, for purposes of federal law, marriage as between a man and a woman" and "provisions that do not require states to recognize same-sex marriages from other states."

It has now been sent to the Senate, whose Democratic leader is Schumer—and, who like Clinton and Biden, once acted to defend traditional marriage.