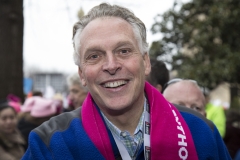 In the last days before Election Day, the Associated Press seems befuddled. One article was headlined, "Biden easily won Virginia. Why is McAuliffe struggling?" Is this really a brainteaser?

With the public polls showing a toss-up, AP's Steve Peoples channeled the fears of Democrats that former Gov. Terry McAuliffe could lose to first-time candidate Glenn Youngkin, and the "finger-pointing and handwringing has begun." And "McAuliffe's hyper-focus on former President Donald Trump may not energize voters." Did they overestimate the appeal of McAuliffe's experience?

For Republicans, this is the best line: "A McAuliffe loss on Tuesday would reverberate across the national political landscape, likely triggering all-out panic among Democrats." AP is not alone on this. Washington Post columnist Dan Balz also said, "if McAuliffe were to lose the race or even win narrowly, Democratic worries about 2022 would increase dramatically."

These journalists know Democrat panic. They can feel it in their own offices.

The AP writer admitted the obvious: McAuliffe suffered when he "quipped" that "I don't think parents should be telling schools what they should teach." This is especially awkward since many parents home-school or put their kids in private schools. McAuliffe went to private schools, as did his children. AP didn't mention that little personal detail.

McAuliffe vetoed a bill to allow not a "ban" on the book but to let students "opt out" of explicit materials, which he somehow compared to censorship. "I'm not going to let parents come into schools and actually take books out, make their own decision," McAuliffe claimed in the debate.

This ties into actual sexual assaults in the high schools of Loudoun County, but Peoples and other AP reporters sounded a note of fearmongering in an Oct. 25 story. It began, "Glenn Youngkin wants voters in Virginia to hear an urgent message: Your children are in danger. In a speech in Northern Virginia's suburbs last week, the Republican candidate for governor highlighted the murky case of a student who allegedly committed sex crimes in two area schools."

Murky? On the same day, a Loudoun County judge ruled the assault occurred.

A quick search of AP archives in 2018 shows their reporters never used the word "murky" to describe Christine Blasey Ford's completely unproven charges of sexual assault by a teenage Brett Kavanaugh. They did report, however, "the conservative jurist's prospects of Senate confirmation remained murky."

Peoples and his AP team added, "Youngkin's final-days focus on sexual predators in schools, hardly a widespread issue, will test the limits of his suburban outreach" and "Youngkin's dark message represents a new front in his monthslong push to repair the Republican Party's standing in the suburbs" after Trump.

You can guess the AP didn't describe the Democrats in the Kavanaugh hearings claiming rape was a "dark message" or "hardly a widespread issue."

AP did find 32-year-old mom Briana Howard, who "said she typically votes for Democrats and voted for Biden last year," but is now "supporting Youngkin because of his stance on education and her frustration with Democrats, who she feels have catered to teachers unions instead of families."

This may underline why the AP reporters are so befuddled. They cannot imagine that a parent might feel at odds with teachers unions, especially Biden-voting parents. They think education is a solid "Democrat issue." AP should have a few Republicans in the newsroom to keep them in better touch.