The Effects of 'Pride' and 'Allyship' on Journalism 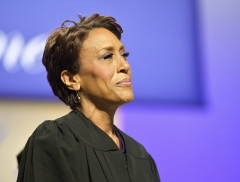 It's June, so we're receiving relentless messaging about the importance of "pride" for the LGBTQ community. One prominent vehicle was the cover of the "Pride Issue" of People magazine dated June 20, featuring, "Robin Roberts In Her Own Words: Love, Faith, & Breaking Barriers."

Underline the "faith" part. The "Good Morning America" co-host insisted she was slow to come out of the closet because "I was afraid people couldn't understand I could be Christian and gay." This was also placed in big, black capital letters as a pull quote.

There will be no rebuttal in People or ABC or anywhere about any conflict between homosexuality and Christianity. Only one viewpoint is acceptable. Is this compatible with journalism? No one asks.

The People magazine cover was celebrated on "GMA" on June 8 with a seven-minute outpouring of love for Roberts under the segment title "Out Loud!" Roberts gushed, "I am honored. I am blessed. I am grateful because this issue is about being true to who you are and the fact that no one walks their path alone. People magazine is highlighting the role allies have in the LGBTQ+ community. For me, my cup runneth over."

People highlighted the "allyship" of ABC reporter Deborah Roberts (no relation), who underlined "how critical it is not only to be tolerant but to be supportive as well."

These are crucial words. You cannot simply live and let live. You must advocate an ideology.

On June 9, ABC News aired an hourlong primetime special titled "PRIDE: To Be Seen — A Soul of a Nation Presentation." Robin Roberts did a story promoting Pastor Michael Walrond of the First Corinthian Baptist Church, who exemplifies the Bible-rejecting creed of LGBTQ "pride."

Walrond preached: "Today is the Pride parade, and we honor Pride this month on this Pride Sunday. We thank God. We honor God, who honors all of humanity." He told Roberts, "What is tragic is that we have to ask churches now whether they are affirming or not." Affirmation is mandatory.

Roberts cajoled: "There's so many that will go, 'Pastor Mike, the Bible. But the Bible says it's wrong.' How do you respond when people say that?"

Walrond had his leftist answer ready. "Well, you know, many people have used Christianity as a conduit for their hate, right? It has been used to justify oppression in all of its forms," he said. "But you have a hard time co-opting the teachings of Jesus that are deeply rooted in love. So, for me, to be a follower of those teachings, to be a follower of the Carpenter, means that I take love seriously and I let love be made manifest in how I show up in this world."

If you think Walrond is co-opting Christianity and ignoring the Scriptures, you don't count.

No one at ABC or People magazine is going to question whether all this "pride" results in a mangling of the truth. No one mentions Roberts lobbing softballs at Jussie Smollett, who uncorked a hate-crime hoax in the streets of Chicago. The spirit of "pride" and "allyship" crushes any shred of skepticism.

The irony of all this is that the LGBTQ crowd loves being "seen," and their dream is obviously to make any opposition "unseen." Journalists think they're synonymous with "democracy" and yet silence debate.