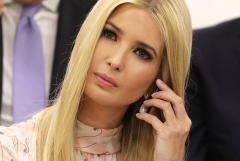 Ivanka Trump takes part in an event on the sidelines of the G20 Summit in Osaka, Japan on June 29, 2019. (Photo by DOMINIQUE JACOVIDES/AFP via Getty Images)

No media analyst believes Vanity Fair is a "news" magazine. It's a glossy liberal rag. But on Dec. 16, it displayed some amazing partisan gymnastics on the offspring of Donald Trump and Joe Biden.

This headline by writer Bess Levin was certainly clickbait for the haters: "Ivanka Trump Faces Off With Father to See How Many People They Can Kill With COVID-19." We can guess no "independent fact-checkers" will get involved to insist that, in reality, the Trumps aren't plotting to kill hundreds of thousands of people.

Just a month ago, Vanity Fair ran a story by a purported ex-best friend of Ivanka Trump's in which she claimed that Trump once asked, "Why would you tell me to read a book about f—-ing poor people?"

Levin's Ivanka screed carried a subhead reading, "The first daughter, a noted epidemiologist, doesn't think lockdowns are 'grounded in science.'" That's not exactly what Ivanka tweeted in response to a video of a businessman frustrated with the lockdowns. "These blanket lockdowns are not grounded in science," she said. "These arbitrary rules imposed by callous politicians are destroying lives. It is just wrong for small business owners to have fight so hard to keep their American dream alive."

Levin sneered: "Yes, that's noted epidemiologist Ivanka Trump decrying lockdowns as the country hurtles toward an estimated 450,000 deaths by February 1, a figure that can largely be blamed on her idiot husband and father."

Most government officials aren't epidemiologists, but this is what liberals do to anyone who questions the most dramatic lockdowns. Ivanka is trying to say that the government rules are arbitrary — just like the liberal media's rules. Massive leftist "racial justice" protests (or massive Biden victory celebrations) were somehow not so-called superspreader events. No one shuts down a government building or a press conference because of the risk of large gatherings. Some states impose strict limits on churches but not on strip clubs. That doesn't look like "science"; it looks like politics.

But Levin quoted a tweet in which the liberal group Citizens for Responsibility and Ethics in Washington, or CREW, expressed disgust, saying: "(R)ather than turning to doctors and scientists, the closest advisors to the president were his fashion-brand owning daughter and her slumlord husband. ... This is why we need tighter nepotism laws."

Just like Vanity Fair, CREW functions as a Democratic Party messaging machine. Search the name Hunter Biden on its website and you'll see a flurry of anti-Trump actions it has undertaken.

In a dramatic nepotism contrast, Joe Biden's most embarrassing child was rewarded with a Vanity Fair story by Emily Kirkpatrick headlined, "Hunter Biden Prepares for His First Solo Art Show Amid Ongoing DOJ Investigation," with the subheading "The president-elect's son revealed earlier this year that painting 'is literally keeping me sane.'"

Kirkpatrick was quoting a New York Times puff piece from back in March. She avoided any mention of the more negative facts in that piece: that Biden admitted to having been addicted to crack for four years and going to rehab seven or eight times. She touted that this unemployed lobbyist is "reportedly in the midst of signing a deal to be represented as an artist by Georges Berges Gallery in New York City with a solo exhibition in the works for next year."

Vanity Fair described Biden as a "venture capitalist turned artist, whose studio is in the pool house of his Hollywood Hills home." He's leaving the family business behind to work with "a metal straw he uses to blow alcohol ink onto Japanese Yupo paper, creating abstract layers of colors and concentric circles."

In the midst of a historic pandemic, Vanity Fair has valiantly avoided any social distancing from the Biden propaganda bubble.

(Tim Graham is director of media analysis at the Media Research Center and executive editor of the blog NewsBusters.org.)