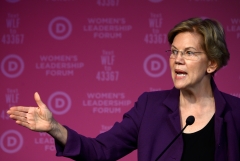 When the Supreme Court justices met Thursday for the first time since the leak, life looked anything but normal. Now they head into the city from secret locations, leaving their homes in the care of entire swat teams. By this point, they've heard about the waves of violence against pro-lifers and the vote on the most radical abortion bill in America's history. They pull into the Court, surrounded by eight-foot barricades, knowing that in just nine days, the entire country has been turned upside down.

While the justices talk next steps, church leaders will be scrubbing walls and filing police reports. Egged on by Democrats like Senator Elizabeth Warren (D-MA), pro-abortion activists have carried out more attacks -- this time in Texas, Pennsylvania, and Colorado, where vandals spraypainted "Pro-choice is pro-life" on the entrance of one church and "You don't have the right to decide how others live" on another. In some parishes, church property was outright desecrated. Even so, Father Peter Harris says, "This won't stop us." If anything, he told reporters, it only "propels us to continue to be witnesses for Christ and the world."

Meanwhile, the same Justice Department that couldn't wait to pounce on "terrorist" parents at school board meetings has done nothing to stop the wave of actual violence against pro-lifers. The silence is so deafening that House Republicans like Michael Cloud (R-TX) have had to resort to formal letters, demanding that the attorney general wake up and do his job. At least two pro-life organizations have been firebombed, several others have been graffitied or harassed, and still Merrick Garland's DOJ is MIA.

Calling the crime wave against churches "a diabolical attack on Americans' sacred right to freely worship and assemble," Cloud reminds Garland that as attorney general, "you are responsible for both enforcing the law and investigating any violations against the law." "In the strongest terms possible, I urge you to acknowledge the rise in anti-Christian hate crimes and investigate these crimes utilizing the full authority of your position and the extensive resources of the DOJ at your disposal."

To most people, it's the administration's double standard that's truly unconscionable. When the DOJ isn't busy targeting moms and dads, it's using every available resource to prosecute the people involved in the Jan. 6 riot. And while it's appropriate to hold any lawbreakers accountable for that day, as National Review points out, "for all the talk of insurrection, the actual charges being levied against offenders from that day include illegal... parading." That's not to trivialize Jan. 6, the editors insist, but it is to say that "the federal government under the Biden Administration has exactly the same duty to protect the Supreme Court that the federal government under the Trump Administration had to protect Congress. And the Biden Administration is failing...."

By huge majorities, Americans disdain the protests at justices' houses. And that consensus (75 to 15 percent) is across party lines. Democrats are almost as horrified (66 percent) as Republicans (86 percent) that it's appropriate to harass the country's highest judges. And yet, the unifier-in-chief still can't spare the time to condemn the mobs swarming the justices' houses. Like most of his party's zealots, the only language he speaks is doublespeak.

The other area where Democrats seem to be wildly out of step with their voters -- and just as indifferent about it -- is on actual abortion policy. Wednesday, in an act of legislative hari-kari, Senate leaders insisted on a second vote for the most extreme abortion bill ever brought to the floor of Congress. Republican National Committee Chair Ronna McDaniel watched the drama unfold, grateful for another chance to draw a contrast between the two parties on the issue. "I don't understand it," she shook her head. "It's out of step with the American people. First of all, we know that 85 percent of the American people absolutely want limits on abortion. And to see the Democrats keep pushing...to abort a baby that we know could live is just so frightening."

It's also, McDaniel pointed out, another reminder of how extreme they are. And frankly, she predicts, it's going to backfire. "I look at senators like Mark Kelly (D-AZ), who's up for election, Raphael Warnock (D-GA) in...Georgia...and they're embracing aborting a baby on a due date -- on the day it would be born. Nine months. They know that baby would live, [and yet] they're fine with that. That is so grotesque...and for Democrats to embrace that...it should be a wake-up call to every American. They have become so radical, they don't even have room for difference of opinion or a difference of thought in their party."

When Senator Chuck Schumer (D-NY) said "The consequences of this vote will stay with us for the rest of our time in office," he was right. And for some vulnerable Democrats, who couldn't bring themselves to stand up for basic humanity, they're about to find out: the "rest of their time in office" won't be as long as they thought.