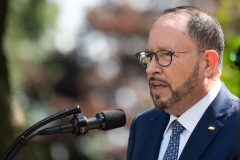 Praise Donald Trump -- get canceled. Praise Barack Obama -- get canceled. Raise your company's sales by 1,000 percent -- get censored. Welcome to the life of Goya CEO Bob Unanue. The conservative folk hero, who Americans rewarded for his conviction by sending profits through the roof, is back under fire -- this time from his own board of directors. Apparently, shattering company sales records doesn't matter if you don't have the right point of view.

His comments, the family said, were unacceptable. On Fox Business last week, Bob was very candid about where he thought America was headed.

"I think this is mission accomplished," he said frankly. "Mission accomplished by the union, the partnership, the conglomerate of social media, Big Tech, big media and government, big government, for ushering in the dawn of a new world order. This great reset...with an unverified election. And the big prize is the United States." Unanue's family, who makes up the majority of the board, was appalled. By Friday, they'd convened to punish Unanue, voting that he "must now obtain board permission before making any more media appearances."

"Bob does not speak for Goya Foods when he speaks on TV," third-generation Goya owner Andy Unanue insisted. "The family has diverse views on politics, but politics is not part of our business. Our political point of views are irrelevant."

That might have been refreshing before last summer, when Bob made headlines for refusing to back down from his partnership with Donald Trump. After all, corporate neutrality is all most Americans have ever wanted. But Goya's situation is different. Their CEO was viciously attacked by the Left for praising Trump—and yet, when he did the same for Barack Obama, he was lavishly applauded. It was the kind of cancel culture double standard that conservatives have grown to despise. When Unanue refused to apologize, Americans didn't just cheer -- they stacked their carts with rice and beans. Now, after cashing in on their CEO's courage, the board (following the example of Chick-fil-A's capitulation) seems intent on snatching defeat from the jaws of victory.

"I could be fired tomorrow," Bob admitted. "It's touch and go."

All of this despite his public willingness to give the new administration a chance.

"I was very thrilled to hear Biden call for unity and prayer," he has said. "I respect him."

But respect isn't enough. This corporate mob wants absolute loyalty to the extremists of the Democratic Party. And that, Caroline Glick warns, is the scary part. By saying that conservatives shouldn't have jobs or banks or places in society, liberals are taking America to some very dangerous territory.

"This incredible hatred," she explained on "Washington Watch," "the demonization of 74 million Americans who voted for Donald Trump... \is unprecedented in American history," Glick warned.

"And it's much worse than [what] we saw in the 1950s under the McCarthy House un-American Activities Committee that blacklisted communists and communist sympathizers." When you have "a fusion of operations and interests and positions being put forward by corporate giants in a political party in the United States -- and that particular political party also controls all elected arms of the federal government -- this...does look a lot more like classical fascism in Italy in the 1930s than...what we're used to in the United States."

Democrats and their megaphones in the media and Big Tech don't just want to silence conservatives -- they want to repress, ruin, and criminalize them.

That isn't capitalism, Caroline argued. It's not the free market system. It's a ruling oligarchy bent on replacing American democracy.

"The kind of power that's being brought to bear today against half of the country -- we've never seen it before. It's disturbing. And it's very important to talk about it, because people have to be aware. They're [going to have to fight to] to protect their right to freedom of speech and the right to [call out] what's happening."

We can't put blinders on, Caroline warned, or we'll be "silenced, shunned, and canceled."

The Great Purge, as she calls it, "isn't about one side seizing the levers of power for itself. It is about one side denying the other side the right to even vie for power."

Ironically, Bob Unanue wasn't "vying for power" when he visited the White House last July. He was fighting to give the Hispanic community more scholarships, jobs, and opportunities. If his board had bothered to check, they might have realized that the man who was leading that coalition, Donald Trump -- the same Republican they want to oust their CEO for supporting -- has done more for the minority populations Goya serves than any president in recent memory.

"He was really able to break the [grip of] identity politics that Americans have been under since the time of Obama," Caroline pointed out. Before the pandemic set in, there had never been "low[er] unemployment among African Americans, among Hispanic Americans, and among women in the Trump economy. He raise[d] up all Americans across the board."

Today, Democrats are bringing those divisive politics back in a way that's truly incredible. The last thing any corporation should do is punish leaders who think Americans deserve better. Encourage Goya's board of directors to back off Bob Unanue and start listening to consumers -- not cancel culture. Call company headquarters at 201-348-4900 or email them here.