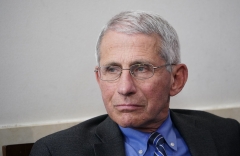 Anthony Fauci's lockdown policies have come under intense scrutiny with the release of a new study. (Photo credit: MANDEL NGAN/AFP via Getty Images)

Three months after Dr. Anthony Fauci declared, "I am the science," the science begs to disagree. An explosive new study from Johns Hopkins has taken the world by storm, slamming the idea of mass lockdowns to fight COVID -- and destroying whatever scrap of credibility Fauci had left. Not only did the lockdowns disrupt lives, but they also had "little to no effect" in saving them. They hurt us socially, economically, and mentally, the researchers concluded, "with devastating effects." If the lockdowns benefited anyone, it turns out, it was the politicians -- who used them to expand power they never should have had.

The meta-analysis, which was published in the journal Studies in Applied Economics, took into account dozens and dozens of other studies on the subject, was so scathing that it concluded by saying lockdowns "should be rejected out of hand as pandemic policy." Fauci, who insisted the idea "saved hundreds of millions of infections and millions of lives," was wrong again. The mortality rate in the United States and Europe dropped by a measly 0.2 percent -- while other deaths, from suicide, overdoses, starvation, and lack of medical care, robbed the world of hundreds of thousands of lives.

The trio of scientists from America, Sweden, and Denmark pointed to the other, more destructive effects: reduced economic activity, rising unemployment, reduced schooling, political unrest, increased domestic violence, and -- interestingly -- undermining liberal democracy. Countries like Sweden that stayed open "fared well" because citizens "willingly took precautions without being ordered to do so," reported New York Post. As the authors wisely point out, mandates only regulate a fraction "of our potential contagious contacts and can hardly regulate nor enforce handwashing, coughing etiquette, distancing in supermarkets, etc."

Dr. Jay Bhattacharya, professor of medicine at Stanford University and one of the authors of the Great Barrington Declaration, has been arguing these points for two years. But he, like so many experts, wasn't taken seriously, accused of "conspiracy theories" -- or worse, censored by Big Tech and Fauci's cabal.

"When I co-wrote the vaccine declaration in 2020," he explained on "Washington Watch," "[we called] for a focused protection strategy. Four days after we wrote it, [former director of NIH] Francis Collins wrote an email to Tony Fauci calling me a 'fringe epidemiologist.' And I work at Stanford, and I may or may not be right or wrong, but I don't think I'm a fringe epidemiologist -- although now, I put it on my business card just for fun. And then he called for a devastating published takedown [of my argument], which came in the form of an op-ed in Wired magazine -- not a scientific takedown...[this is a strategy they] used to try to marginalize voices -- scientific voices."

Senator Rand Paul (R-KY), one of the doctor's loudest critics, thinks one of the worst mistakes we made was shutting down speech and scientific dialogue. In the 14th century, he pointed out, the pope thought he could burn infection out of the air with candles. "It was a wrong-handed notion. It took a few centuries -- really to the 19th century -- to understand the germ theory. Now we have lockdowns, which are not based in science [either]...let's hope we learn from our mistakes."

His colleague, Sen. Roger Marshall (R-KS), another one of Congress's doctors, hates that all of this "bad judgment" and "poor leadership" has given Americans "an unhealthy fear of COVID." We need a new approach, he insisted -- and "that new approach should not include Dr. Fauci."

Bhattacharya agrees. It's one of the most dangerous conflicts of interest he's ever seen.

"You cannot have society run by a narrow class of scientists -- and you certainly cannot have all that power in the hands of one man who controls the budgets of an enormous number of scientists. A lot of...qualified people stayed silent [on the lockdowns] because they feared that their reputations would be harmed. Their ability to get grants would be cut undercut because the person in charge of the lockdown policy was also in charge of scientific funding."

He's right. Not many scientists would be willing to put their grant money on the line to cross Fauci. If he's the one signing your research checks, it's all the more reason to keep unpopular opinions to yourself. That means a large swath of epidemiologists, virologists, and immunologists were stifled or refused to challenge the wisdom of the man calling the shots. Now, with the Biden Administration's complete failure to stop COVID, more people have decided to speak up.

But more needs to be done, Bhattacharya warns.

"[This was] probably the single worst public health mistake I've seen in my lifetime," he said. "We cannot have such a small, narrow group of people in charge of science. And we certainly should have a bright firewall between people who fund science and people who make health policy. It is now very clear that the level of power when you give a single person or a single set, a small set of people both of those roles, you create an opportunity for corruption that I think most of us didn't realize existed before the pandemic, but we do now. So if science is to be reformed, we need to reform that."