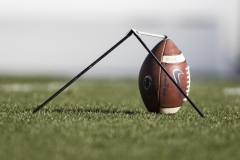 In case companies hadn't noticed, now isn't exactly a good time to drop a bombshell about radical politics. Either the NCAA hasn't been paying attention to the massive uproar in Georgia, or they don't seem to grasp the intensity of the pushback. Either way, most Americans (including the moderate ones), are fired up about the abuse Republicans are taking over election reform -- and this time, they don't mind saying so. That's bad news for a woke collegiate sports association that's used to dangling a few championship games in front of states and getting their way.

When the NCAA first tried this stunt -- way back in 2016 -- it was meddling in the North Carolina privacy bill. Now, five years later, they're upping their extremism by joining the fight against girls' sports. In a statement Monday, the association reminded everyone that their loyalty isn't to women's rights but to "transgender student-athletes," the smallest fringe group of competitors in America. This commitment, they claim, is "grounded in our values of inclusion and fair competition." What it's not grounded in, normal people will argue, is science, morality, common sense, or true equity.

In what are meant to be ominous tones, the NCAA warns that it is "monitoring" the states that are taking a stand against this wildly unpopular agenda and vowing only to host events in the places that share their absurd views on gender. To their surprise (and thanks, in large part, to the awakening that's happened after Georgia), most legislators have had one response: good riddance. Whatever power the NCAA thinks it holds over these elected officials has been dramatically diminished the more entitled and radical Left's policy demands become.

To ordinary Americans, it's illogical to force girls to compete against biological men. Once you step outside of the Washington, D.C. bubble and talk to people in both parties, they'll agree. As polling across the spectrum shows, it's one of the strongest areas of bipartisan consensus in the nation. Some surveys, like Scott Rasmussen's Just the News Daily Poll, show Democrats agreeing with Republicans by a 50-25 percent margin. On the Right, it's no contest, almost everyone (81 percent) wants their daughters to be able to compete on a level playing field for titles, scholarships, and opportunities.

Even more liberal outlets, like Politico in its Morning Consult Poll, pointed out that this is a culture debate that isn't really a debate. Across gender, party, and generational lines, protecting women's rights makes sense in most people's minds.

"So let's dispense with the notion that transgenderism as pushed by corporate media, Big Tech, Hollywood, and corporate America is somehow 'mainstream,'" the Federalist's John Daniel Davidson insisted. "It's not even close to mainstream."

Of course, if the NCAA had been paying attention to the sweeping condemnation of South Dakota Gov. Kristi Noem (R-S.D.) for vetoing her state's sports bill, they might understand why leaders didn't take too kindly to the association's warning.

"The NCAA likes to threaten Florida and other states. Well, here's a threat to the NCAA," Sen. Rick Scott (R-Fla.) thundered back. "The American people are not going to allow biological males to compete in women's sports. It's not going to happen. If you keep threatening the public with your woke elitist psychobabble, the NCAA will not last much longer. Florida cannot be replaced, but you can be replaced."

In places like Kansas, where bills are racing through the legislature to protect girls, Republicans are putting the NCAA in its place. State Sen. Ty Masterton (R) fired back, "Republicans in the Kansas Senate will not cower in the face of such intimidation and inflammatory rhetoric. We will not back down in defense of fairness in women's sports. We will not sell out decades of progress by women for a few days of a basketball tournament. We will continue to engage in this debate with scientific facts, civility, and respect."

No one, Texas's Valoree Swanson (R) suggested, is going to fall for these intimidation tactics anymore.

"This is about fairness and common sense," the Lone Star rep insisted. "I am proud to stand with our female athletes in Texas, and I refuse to abandon them. Biological males are free to compete in sports in Texas, but not in sports exclusively for girls."

One Florida legislator turned the tables on the NCAA, calling out their horrible treatment of girls in the latest collegiate tournament.

Maybe they should learn to treat their own athletes with "dignity and respect," state Rep. Chris Latvala (R) argued. "The women's basketball tourney had subpar facilities and COVID testing and the volleyball tournaments wasn't even going to have announcers for the first two" rounds.

But hypocrisy from these Big Business hostage-takers is exactly what Americans have come to expect, Sen. Marsha Blackburn (R-Tenn.) pointed out on "Washington Watch." Just look at how these same sports leagues and CEOs act in China, she argued. They're boycotting Georgia for making democracy safer and happily operating in countries that don't have democracy or human rights.

"The MLB, the PGA, the NFL, the NBA, all of your sporting leagues should do what they're there to do: play ball...the activism like this is just astounding." And frankly, she said, "It's not good corporate governance." No one -- least of all an America sports association -- should willingly put female athletes at a disadvantage. "We should all [be able] to say this is not right," she insisted. Girls deserve "the right to compete and excel."