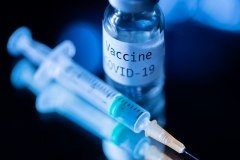 "Woke, broke, or both?" It's a question the U.S. military can't avoid these days. Trapped in a sinkhole of left-wing radicalism, our troops are too busy fighting climate change, white supremacy, conservative "extremism," and COVID to deal with America's real enemies. Now, as if the embarrassment of Afghanistan, a feeble commander-in-chief, and their top brass's betrayals weren't enough, the president says he's ready to fire anyone who won't get the vaccine.

It doesn't matter whether they have natural immunity or not, Fox News's Tucker Carlson pointed out. Or whether they have deeply-held moral or religious objections. This is about power. "The point was to bow before his authority and the authority of the Democratic Party. No excuses or exceptions." What's the scientific justification, he asks? "Well, of course, there isn't any. The fighting strength of the military is young, healthy people, virtually all of them at extremely low risk of dying from COVID." Believe it or not, he argues, three times as many troops have died of suicide over the last year-and-a-half than the virus.

So is this really about public health -- or a more sinister agenda? Can America really afford to lose hundreds -- if not thousands -- of dedicated, experienced service members in a dangerous global climate like this one? And over a mandate that is almost certain to be found unconstitutional at the highest courts? The simple answer is no. But if the motivation is to "cleanse" the military of conservative men and women of faith, then it all makes sense. "The point of mandatory vaccination is to identify the sincere Christians in the ranks, the free thinkers, the men with high testosterone levels, and anyone else who doesn't love Joe Biden, and make them leave immediately." It is, Carlson said frankly, "a takeover of the U.S. military."

A takeover, House and Senate Republicans have vowed, they will never allow. While the president moves forward with the force-wide coercion, Congressman Mark Green (R-TN) and Senators Roger Marshall (R-KS), Ted Cruz (R-TX), James Lankford (R-OK), and Tommy Tuberville (R-AL) are doing everything they can to protect the conscientious objectors. If the military resorts to booting service members over the vaccine, then at the very least, the Republicans argue, they deserve an honorable discharge.

"No American who raises their hand to serve our nation should be punished for making a highly personal medical decision," Green said. As a doctor and veteran, Green has been adamant that our brave men and women shouldn't lose their benefits over Biden's inflexible mandate.

"As a physician, I've weighed the pros and cons of the COVID-19 vaccine and have chosen to get the shot. As a former Army officer, I also understand the need to vaccinate service members on deployment against a highly infectious virus. For years, the military has possessed the authority to compel service members to be vaccinated. However, those vaccines underwent years of research with ample longitudinal safety data. In the case of the coronavirus vaccine, that longitudinal data is not yet possible. Therefore, I believe service members who make the personal medical decision to refuse the vaccine, and are subsequently separated from the service for their refusal, should not receive anything other than an honorable discharge for refusing to take the vaccine. Period."

Making this choice a career-killer is un-American, the senators agree. Our heroes "should not be treated as felons," Marshall argued, pointing out that dishonorable discharges are usually reserved for soldiers who are guilty of assault, treason, sexual abuse, and other crimes. If the Biden Administration refuses to see that, the next president should do what this president has done with the so-called Don't Ask, Don't Tell "victims" and reinstate whatever veterans' benefits they lost as a result of this mandate (which, unlike Don't Ask, Don't Tell, was an undemocratic, highly-politicized government overreach).

Meanwhile, First Liberty Institute's Mike Berry says he's been inundated with calls from service members who say the military's promise of a religious exemption is virtually non-existent. They've been told that requesting an accommodation, even for a personally-held belief, is "an exercise in futility," he writes. "Or worse," that even trying to get an exemption would result in "blacklisting" or having their travel and holiday privileges revoked. "Nearly every service member with whom I've spoken tells me that, if given an ultimatum, they would rather leave the service than violate their religious beliefs. Some are willing to be court-martialed. Let that sink in...."

And yet, the leftist media is only egging the Pentagon on -- mocking the mere idea of a religious objection. "There is no Church of Moderna Disbelievers," the Los Angeles Times scoffed. "Shame on them," the paper said of Christians and others who have religious convictions about everything from the fetal lines used for the vaccines to the legitimacy of a government mandate. The jobs of public servants "call for them to protect the public, and that shouldn't just mean from crime and fire. They have an obligation to avoid harming the people they serve... Religious convictions -- whether newly found as a convenient excuse or long held by sincere believers -- cannot trump the importance of bringing the COVID-19 pandemic under control."

Of course, no one is surprised that a woke group like the Times editorial board would want to "dump COVID vaccine religious exemptions." These types of arguments are only going to become more common the more society becomes secularized.

"Increasingly," FRC's David Closson points out, "the beliefs and convictions of people of faith are not only perceived as outdated or bizarre but as subversive and dangerous. This is certainly the attitude reflected in the LA Times editorial, which derides and belittles religious beliefs. But in our pluralistic age, it is in the best interest of all Americans--religious and non-religious--to respect the sincerely held beliefs of our fellow citizens. We may not always agree with our friends and neighbors on important matters, but we should follow Jesus's command to treat others the same way we want to be treated. In this case, it seems appropriate to respect those who have legitimate, morally-informed reasons for not receiving a vaccine."

Blinded by their anti-religious dogma, the Left fails to see how their line of reasoning (or lack thereof) exposes their motives. If the vaccine protects you from the virus, then the only ones who are unprotected or at risk are the unvaccinated. How are the unvaccinated harming the vaccinated public? They aren't -- unless, of course, the vaccine doesn't really provide the protection they claim.

For more on the debate, check out David Closson's new post, "How Should Christians Think about Biden's Vaccine Mandate?"

Tony Perkins is the president of Family Research Council.