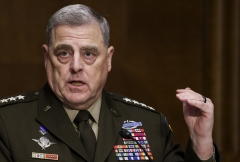 Ignoring the controversy over critical race theory didn't go so well for the Left. So they tried denying it. That was a bust. Now, they've moved on to a new strategy: digging in and defending it -- and, considering the latest clash over the military, that might be the worst idea of all.

When the head of the Joint Chiefs of Staff, General Mark Milley, came to testify on the latest defense budget, a handful of Republicans took the opportunity to put the country's top general on the hot seat over the wildly unpopular move to teach critical race theory in the ranks -- starting with America's service academies. When conservatives pressed Milley on the complaints they've heard from cadets and others, Milley was openly strident.

"I personally find it offensive that [anyone is] accusing the United States military...of being 'woke' or something else because we're studying some theories that are out there," he told Waltz. Our service members need to be "open-minded and widely read," especially, he argued, on issues like racism. "I want to understand white rage -- and I'm white."

In a particularly testy moment, Defense Secretary Lloyd Austin seemed to mock Republicans' "anecdotal evidence" that the troops were unhappy with the training. Look, Rep. Michael Waltz (R-FL) fired back that Republicans aren't manufacturing this firestorm.

"This isn't something we're raising. This came to me from cadets, from families, from soldiers with their alarm and their concern at how divisive this type of teaching is that is rooted in Marxism, that classifies people along class lines, an entire race of people as oppressor and oppressed."

Despite piles of reports to the contrary, Austin replied that the military "does not teach critical race theory."

"We are focused on extremist behaviors and not ideology," he tried to claim, "not people's thoughts, not people's political orientation."

That's not what our service members are saying, Waltz insisted on "Washington Watch."

"The mainstream media wants to portray this as some kind of GOP culture war." But we didn't start it, he argued. Our brave men and women in the uniform are coming to members of Congress and sounding the alarm because they find these teachings, as we all do, "very, very divisive, bad for morale, and horrible for cohesion."

"And I can tell you from my 25 years in the Army as a Green Beret," Waltz said, "I cannot imagine something more destructive. When I came in, we were told: shave your head, wear the same uniform, and you now bleed Army green. The only thing that matters in terms of skin color is camouflage. And I could tell you for sure, terrorists and the Chinese bullets on the battlefield when you're in that foxhole could care less about all of these things."

What people need to realize, Waltz warned, is that these aren't just history classes. "These aren't things of a bygone era that we want our cadets to understand...[t]his is activist indoctrination that's going on right now -- as we speak -- that teaches our future military leaders that our Constitution and our foundational institutions in this country, our court system, our political system is bad, it's evil, misogynist, and colonialist." And if you listen to the theory's top gurus, these are things that need to be "resisted and opposed and torn down." Now, it's one thing to teach that to a kid at U.C. Berkeley, Waltz argued, but it's quite another to teach it to our troops who will one day have their finger on the trigger.

Of course, Milley tried to deflect all of that by saying he's read Karl Marx and Mao Tse Tung, and that doesn't "make me a communist." But the far-Left and the Biden administration don't want people to study these philosophies as history. They want to put them into practice and divide our nation's military based on skin color. They are politicizing the very core of our national defense -- which should be focused on fighting and winning wars. Instead, every one of these toxic classes is taking away from their time to shoot, train, drill, and learn to defeat our adversaries. So there's a legitimate threat to every American when our military is so universally distracted and divided.

And the irony is, this is the same General Milley who tried to distance himself from the White House under Donald Trump. When Milley publicly apologized for standing outside of St. John's Church with the former president, he said he shouldn't have appeared in uniform with Trump because it was "too political." Well, what does he think this is? Critical race theory is just about the most political issue there is. If Milley truly cared about being "neutral," then he would stand up and fight this woke administration trying to radically remake our military because, as far as FRC's Lt. General Jerry Boykin is concerned, our entire fighting force is at a tipping point.

"I have never been more concerned about our military," he told me on Thursday's "Washington Watch." "I thought it was bad in the Obama years, but let me tell you, this is awful." He can't believe all of these leaders who came up through the Army and Marine Corps are suddenly jumping ship on the warfighting focus.

"I respect General Milley for his years of service," Boykin said. "I really do. But I saw what he did with Congressman Waltz as being more theater. I didn't see any seriousness. Look, I spent 36 and a half years in the military. I didn't see white rage. I saw very little racism [at all] in the military. And keep in mind -- I came in in 1970, so we were still coming out of the 60s race wars."

Fortunately, there are still people on the inside (and outside) willing to fight for decency, free speech, religious liberty, and the other proud traditions of our fighting force. Just this week, Army Chaplain Andrew Calvert, who was under investigation for posting his objections to opening up the military to transgenderism, was fully reinstated. Thanks to help from our friends at First Liberty Institute, the Army "agreed not to issue a formal reprimand...[clearing] the way for Chaplain Calvert's record to be cleared." As General Boykin points out, most of the cases where groups like my Family Research Council and First Liberty get involved do end successfully. "[First Liberty calls] us as soon as they get a case...and we always follow through with rallying support for these people, getting members of Congress fired up about it, and getting petitions out that we have people sign. And we've had very good success working with First Liberty Institute in having the initial judgments against our Christian service members reversed."

But the culture of the military should never be hostile to faith in the first place. These are men and women who are willingly laying down their lives for the freedoms this administration is denying them. That has to stop. And getting rid of this noxious crusade for critical race theory would be a good place to start.