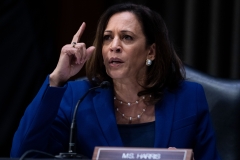 U.S. Supreme Court nominee Amy Coney Barrett encountered a barrage of questions about a wide range of issues during her confirmation hearings spread. Some were about climate change.

Democratic vice-president candidate Sen. Kamala Harris wanted to know Judge Barrett’s views on climate change. She asked, “do you believe that climate change is happening and that it's threatening the air we breathe and the water we drink?”

Judge Barrett declined to comment on the matter, as she referred to climate change as a “very contentious matter of public debate”.

This short exchange was sufficient for the mainstream media to brand Judge Barrett a “climate denier.” The Daily Beast falsely claimed “Kamala Harris Gets Amy Coney Barrett to Deny Climate Change Consensus,” whilst giving no proof.

The media were so engrossed with Judge Barrett’s answer that they forgot to subject Sen. Harris’ questions to critical evaluation.

First, of course, should any legal case related to climate change ever reach the Supreme Court while she’s a member, the Court’s job will be not to determine what scientific evidence reveals but whether a given law or regulation is constitutional. There being no such case before the Court now, there was no constitutional question for Judge Barrett to address. And had there been such a case pending, it would have been a violation of judicial conduct for her to indicate in advance what her assessment of that case might be.

Second, Judge Barrett chose not to answer Harris’ question about the reality of climate change, but I—as an environmental researcher and climate scientist—will take the luxury to address it here.

Sen. Harris suggests that climate change threatens the “air we breathe and water we drink.”

To begin with, air and water availability and quality are different in different parts of the world, no matter how the global climate has changed in the past few decades.

For example, both the availability and quality of water and air near the poles are far better than in the highly industrialized cities of South Asia, despite an overall change in climate at both places.

Quality of Air and Water

Deterioration in quality of air and water can occur due to multiple factors that act in combination or individually. And according to the federal Environmental Protection Agency under President Barack Obama, climate change is not one of them.

Likewise, exhaust from factories that do not employ pollution control devices may pollute the air in the localized region. Illegal and natural forest fires, stubble burning, natural dust waves, and a host of other non-climatic events often cause air-pollution in different parts of the world.

But there is no evidence available to suggest that an increase in Global Average Temperatures  (GAT) has caused deterioration of air quality. To the contrary, as these graphs show, since 1990, deaths from air pollution have halved. Much of this improvement is due to the use of fossil fuels like natural gas for cooking, which drastically reduced deaths from the use of biomass (primarily wood and dung).

Regional (localized) water shortage problems have always existed in different parts of the world. Cities face water shortages due to depletion of groundwater sources, and arid landscapes are naturally prone to water shortages because of environmental conditions.

Despite the constant increase in GAT over the past 5 decades and the unstable situation of groundwater levels in many regions, the access to clean drinking water and its utilization has increased globally in the past few decades.

In 1980, just around 3 trillion cubic meters of freshwater—for drinking, agriculture, and industrial use—were used globally. In 2014, as much as 4 trillion cubic meters were used. That is not a decrease but a sharp increase in usage, suggesting the availability of water for an increasing population. The advancement in technology for extraction and transport of freshwater also played its part in helping improve the situation.

These statistics stand in contrast to Harris’ claims. The past 5 decades have shown us that freshwater use can be improved all across the globe despite the high volatility in environmental conditions and the rapid growth in demand.

To the contrary, scientific data suggest that life expectancy—the age to which a newborn baby will live—has increased dramatically all over the world, even in countries that have some of the poorest air and water quality in the world.

Given that access to freshwater has actually increased across the globe in the midst of the gradual increase in global temperatures and that the pioneers of the Industrial Revolution—like the United Kingdom—now have some of the cleanest air in the world, there is no reason to believe the change in temperature or the use of fossil fuel determines the air or water quality and availability.

Furthermore, Harris’ fears about the future climate are not grounded in solid science. As per the most recent analysis, most of the estimated dangers from climate have been from exaggerated predictions that do not reflect real world temperatures.

Vijay Jayaraj (M.Sc., Environmental Science, University of East Anglia, England), is a research contributor for the Cornwall Alliance for the Stewardship of Creation and resides in New Delhi, India.