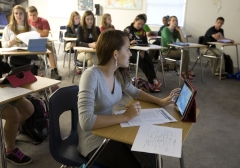 People these days worry about the rising prices of gasoline and milk, but there’s another destructive inflation that has gone unchecked for years: grade inflation. Just like monetary inflation, which makes your bank account look great until you’re rudely awakened by the reality that you can’t buy as much as you used to, grade inflation makes your transcript look great, until you discover that you haven’t learned as much as you thought. And though grade inflation is not new, its recent intersection with “equity” bodes ill for the integrity of our schools.

It’s hard to deny the reality of grade inflation at America’s colleges. As Times Higher Education reported in 2016, “'A' is by far the most common grade on both four-year and two-year college campuses (more than 42 per cent of grades). At four-year schools, awarding of 'A's has been going up five to six percentage points per decade and 'A's are now three times more common than they were in 1960.” Three years later, Forbes reported that “in the early 1960s, 15 percent of all college grades nationwide were 'A’s. Today, that number has tripled — 45 percent of all grades are 'A’s. The most common grade awarded in college nationwide is an 'A'.” As a sign of how deeply entrenched grade inflation has become, note that two prestigious institutions — Princeton University and Wellesley College — that put the brakes on grade inflation in 2004 have since been forced to rescind their efforts (Princeton in 2014, and Wellesley in 2019). No other universities had followed their lead, and they did not want to continue bearing the brunt of student complaints.

The precollege situation is arguably worse. A recently published ACT analysis of 4 million high school seniors shows steadily rising grade-point averages for students who took the ACT between 2010 and 2021, with the number of 'A-' students surpassing the number of 'B-' students in 2016. This did not happen because students who took the ACT became academically stronger; over the same time period, students’ ACT and National Assessment of Educational Progress (NAEP) scores stagnated or fell. An earlier study by the College Board shows a similar pattern of rising grade-point averages and stagnant SAT scores between 1996 and 2006. The study also compared Advanced Placement (AP) class grades assigned by the students’ teachers against scores in the anonymously graded AP exams. Not surprisingly, AP class grades rose steadily while AP exam scores stayed stagnant.

In New York City, the problem may not be grade inflation so much as grade fraud. At dozens of public middle schools, the discrepancy between rosy passing grades and dismal scores on state assessments was so large that a city councilman demanded an investigation in 2019. The worst-offending middle schools are concentrated in mostly black neighborhoods of the Bronx, central Brooklyn, southern Queens, and Harlem. One such middle school is the Eagle Academy for Young Men of Harlem, where, according to 2018 data, 93.9 percent of students passed their math classes even as 95 percent of them failed the eighth-grade New York State math assessment. The founder and former head of the Eagle Academy network, David Banks, is now chancellor of New York City’s Department of Education. To much fanfare, Banks recently unveiled a “reinstated” Gifted & Talented program that leverages — you guessed it — grades.

What do the education bureaucrats who gave us this grade inflation have to say for themselves? They can no longer deny that grade inflation is real, so they turn to “equity” as a defense. Beginning in 2020, for example, the San Diego Unified School District eliminated “non-academic factors” from grades. Sounds reasonable, until you read the fine print: the new policy allows students to hand in work late, redo poorly graded assignments indefinitely, and even cheat without receiving a lower grade as a penalty (“reflection” and counseling are the approved responses to academic dishonesty). To justify the policy change, San Diego administrators cited the fact that black and Hispanic students receive "D" or "F" grades 20 percent and 23 percent of the time, respectively, while white and Asian students do so just 7 percent and 6 percent of the time. “For months, the district has been working on multiple areas of its operations, including grading, in efforts to make them more anti-racist and equitable, partly in response to social justice protests that erupted over the summer in response to George Floyd’s death.” Somehow, “equity” makes its way into justifying pedagogical “improvement” with lowered standards.

One education researcher claims that grade inflation is actually good because “awarding higher grades to female students helped push them towards STEM majors” and because inflated grades “can motivate all students, including those from low income backgrounds, to stay in college and graduate....students may not be learning anything more than usual, but at least they’re sticking with school longer.” In other words, never mind meaningful grades and educational integrity — just give us our diplomas.

A recent investigative report exposes how grade inflation, dumbing down, and “equity” come together. In 2020, an equity crusade by the Fairfax County School Board in northern Virginia replaced a straightforward, test-based meritocratic admissions process for enrollment at the nationally acclaimed Thomas Jefferson High School for Science and Technology (TJ) with a geographical quota system layered on top of multiple criteria including non-academic factors, all crowned by a random lottery. This Rube Goldberg contraption was intended to create an ostensibly race-neutral procedure to “solve” the problem of “too many Asians” at TJ. (The student body was slightly more than 70 percent Asian prior to the 2021–2022 school year.) The report shares an email sent by TJ math teachers to parents that suggests that all is not well at the school. According to the email, the average score for TJ’s most recent trigonometry final exam was “in the low 70s,” and “a substantial minority [scored] below 50 percent.” These results — “the lowest scores we’ve ever seen,” according to the email — came even though the final exam was “substantially easier” than previous years. The leaked email concluded by noting that “we will curve the exam by 10 percentage points...but you should know that this curve is artificial and not deserved.” Similar reports of widespread student failure emerged from San Francisco’s top high school, Lowell, after the school district replaced its meritocratic admission tests with “equity” lotteries; the new San Francisco school board voted this Wednesday to eliminate the lottery and return to the merit-based admissions.

Grade inflation attacks the very core of education, starts a vicious circle for the further corruption of educational integrity, and leads to our schools becoming mere diploma mills. The circle must be broken. Standardized testing is our most potent antidote to grade inflation and its destructive consequences. Objectivity, anonymity, uniformity, transparency, third-party independence—all these features make standardized testing highly effective in precisely the areas where grades tend to fail. Indeed, that’s why advocates for inflated grades are so keen on discrediting standardized testing (which they do badly): they wish to conceal the devaluation of standards.

We need more reliance on standardized testing, not less. Otherwise, unchecked grade inflation will worsen, educational integrity will continue to deteriorate, and future generations will be less literate, numerate, and analytical than those that came before.

Wai Wah Chin is a Manhattan Institute adjunct fellow and is the founding president of Chinese American Citizens Alliance of Greater New York, a volunteer group pushing for equal rights, particularly in education, for New Yorkers.

Editor's Note: This piece originally appeared on The City Journal.