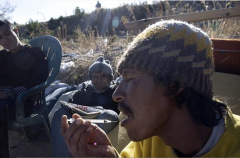 A man with a syringe on the banks of the Rio Grande River in Ciudad Juarez, just across from the United States. (Photo by Shaul Schwarz/Getty Images)

(CNSNews.com) - A report published by the Congressional Research Service on April 2 concluded that Mexican drug cartels have “exploited” the COVID-19 pandemic and “remain the primary source of heroin and fentanyl trafficking into the United States.”

“As predicted, the cartels seem to have exploited the pandemic for profit and territorial gain,” said the CRS report.

“The pandemic does not appear to have diminished the extensive criminal and political power of Mexico’s criminal organizations,” said the report.

“DHS also considers Mexican cartels a key threat to the U.S. homeland because of their ability to control territory and trafficking routes along the U.S. Southwest Border and to co-opt officials at various levels of government,” the report said.

“Mexico’s cartels remain the primary source of heroin and fentanyl trafficking into the United States,” the CRS report stated.

“According to the U.S. Drug Enforcement Administration, the Sinaloa Cartel and the Jalisco New Generation Cartel (CJNG) in particular ‘show signs of expansion in Mexico’ and have increased their role in production and pill pressing,” it said.

“Neither the risk of infection nor government-mandated mobility restrictions during the pandemic appear to have significantly deterred cartel activity,” the CRS report said. “Since the pandemic’s onset, the range of criminality by smaller cartels has expanded as new opportunities for exploitation have appeared. Current conditions seem to have fostered intensified inter-cartel competition, favoring larger Mexican cartels’ territorial ambitions. As a result, crimes of assault and homicide have remained elevated during Mexico’s pandemic response, even as crimes of opportunity, such as robbery, appear to have declined.

“Mexico’s homicide rate remains ‘stuck’ at historically high levels, with 27 murders per 100,000 in 2020,” said the report. “During 2020, the most homicides in Mexico were reported in the central state of Guanajuato and the border state of Baja California, where rival groups jockeyed for drug routes, extortion rackets, and control of other illicit markets. Organized crime-related violence even encroached into the Mexican capital. There was a sharp increase in murders of public office holders and candidates for Mexico’s midterm elections scheduled for June 2021.”