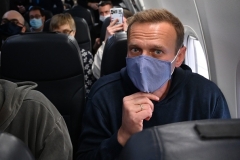 Alexei Navalny prepares to fly from Berlin to Moscow on January 17. Hours later he was arrested on Russian soil. (Photo by Kirill Kudryavtsev/AFP via Getty Images)

Moscow (CNSNews.com) – The shock arrest of Russian dissident Alexei Navalny brought widespread condemnation from Western governments – including the outgoing and incoming U.S. adminstrations – prompting Russian Foreign Minister Sergei Lavrov to accuse the West of rallying behind President Vladimir Putin’s most prominent critic in a bid to deflect attention from its own internal deep “crisis.”

“We saw how they latched onto yesterday’s news of Navalny’s return to Russia,” Lavrov told reporters on Monday. “You can feel how glad they are to copy the same statements. They are glad because it seems that this makes Western politicians think that in this way, they can distract from the deepest crisis that the liberal model of development finds itself in.”

Navalny was arrested at Moscow’s Sheremetyevo airport Sunday as he tried to return to Russia from Germany, where he had spent the last five months recovering from a suspected poisoning attack for which he blames Russian security services.

In a statement on Sunday evening, Russia’s prisons service said Navalny had been arrested for “multiple violations of his probation terms” relating to a suspended sentence for a 2014 felony conviction on fraud and embezzlement charges. Navalny has repeatedly denied any wrongdoing, claiming the charges against him were politically motivated.

At a court hearing in a police station outside of Moscow on Monday, a judge ordered Navalny to be held in custody for 30 days, after which a trial will be held to assess whether he violated the terms of his probation. If found guilty, he could face up to three-and-a-half years in prison.

Navalny’s lawyers said they were not allowed to speak with him for 15 hours after he was detained, and that they were informed of the court hearing just moments before it began.

Following the verdict, Navalny released a video on YouTube – recorded by his lawyer in the courtroom – urging his supporters to start preparing to protest.

“I all upon you to not stay silent, resist, and take to the streets,” he said. “We are the only ones who will protect ourselves. There are so many of us that if we want to achieve something, then we will do it.”

Leonid Volkov, head of Navalny’s network of regional offices, announced that the group has begun preparing to hold “large rallies across the country on January 23.”

For the past decade, Navalny has been one of the most visible figures in the Russian opposition. The 44-year-old Yale-educated lawyer has amassed millions of followers online by publishing investigations into the wealth of senior officials. He also played an important role in organizing mass protests against the Kremlin in 2011-12 and 2017-18.

In August, Navalny fell unconscious during a flight from the Siberian city of Tomsk to Moscow, and was subsequently rushed to the hospital after the plane made an emergency landing in Omsk. He was airlifted to Germany on a private plane two days later, and spent a month in intensive care at Berlin’s Charité hospital before being discharged in September.

Although doctors in Omsk said they found no signs of poisoning, analyses by laboratories in Germany, France, and Sweden concluded that Navalny had been poisoned with Novichok, a military-grade nerve agent developed by the Soviet Union in the 1970s and 80s. Moscow has previously been accused of using the substance in a 2018 attack in England against former Russian intelligence officer Sergei Skripal.

Last month, a joint Western-Russian media investigation contended that Navalny had likely been poisoned by an elite subunit of the Federal Security Service (FSB), whose agents possessed “backgrounds in chemical and biological warfare, medicine, and special operations.”

The Kremlin has repeatedly denied targeting Navalny. During a press conference last month, Putin joked that if his security forces had really wanted to assassinate the opposition activist, “they would have probably finished the job.”

Yet Navalny says he extracted what amounted to a confession from one of FSB agents following him, during a 49-minute phone call last month in which he pretended to be a senior security official. In a recording of the purported call, posted online, the man identified as Konstantin Kudryavtsev appears to admit that the FSB tried to poison Navalny by sprinkling Novichok on his underwear.

The European Union and the German, French, British, Italian and Canadian governments are among those condemning Navalny’s arrest, while the Latvian, Lithuanian, and Estonian foreign ministries jointly called for new sanctions against Russia.

The outgoing and incoming administrations in the U.S. expressed solidarity with Navalny.

“We note with grave concern that his detention is the latest in a series of attempts to silence Navalny and other opposition figures and independent voices who are critical of Russian authorities,” said Secretary of State Mike Pompeo.

“Mr. Navalny should be immediately released, and the perpetrators of the outrageous attack on his life must be held accountable,” said Jake Sullivan, who will serve as national security advisor in the Biden administration. “The Kremlin’s attacks on Mr. Navalny are not just a violation of human rights, but an affront to the Russian people who want their voices heard.”