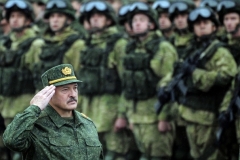 Moscow (CNSNews.com) – Russia and Belarus have begun what is reported to be the largest military exercise in Europe since the end of the Cold War.

The Zapad-2021 exercise, which launched on Friday and will run until September 16, features 200,000 troops, hundreds of tanks and artillery systems, along with 80 aircraft and 15 warships, according to Russia’s Defense Ministry. Drills are being held at 14 training grounds in Belarus and western Russia, as well as in the Baltic Sea.

If the figures are accurate, Zapad-2021 is poised to become the largest military exercise in Europe since the 1981 Zapad drills, which involved up to 150,000 Soviet and Warsaw Pact troops.

Earlier this month, Belarusian President Alexander Lukashenko said Zapad-2021 was an opportunity for the Russian and Belarusian militaries to rehearse countering a potential military attack from the West.

“We effectively have a single army, with the Belarusian military forming its backbone in the western direction,” he said. “If, God forbid, a war starts, the Belarusian army will be the first to engage in the fight, and the western group of Russia’s armed forces will join quickly after to form a joint defense.”

According to a description issued by the Belarusian General Staff earlier this year, Zapad-2021 is based on a scenario in which a fictional but NATO-like Western coalition attempts to invade Belarus in a bid to overthrow the government and annex the western part of the country. In response, Belarus and Russia mobilize their armed forces and organize a defensive operation.

The exercise has elicited visible unease from Ukraine and neighboring NATO members Poland, Latvia, Lithuania, and Estonia, with senior officials saying they will raise tensions along their borders with Belarus.

Ukrainian Foreign Ministry Dmitry Kuleba told reporters that Zapad 2021 carried “very serious risks” for Kyiv. “We all understand that if Russia swallows Belarus in one form or another, then another thousand kilometers will emerge as a source of danger for the sovereignty and territorial integrity of Ukraine,” he said, referring to Ukraine’s long border with Belarus.

Russia and Belarus are long-time allies, and the Kremlin has subsidized Lukashenko’s government for decades with loans and cheap energy. In 1999, the neighbors signed a document calling for the creation of a “union state” that would integrate their political and economic systems, although 20 years later it remains an unfulfilled aspiration.

Lukashenko has repeatedly put off signing a final roadmap, accusing the Kremlin of trying to push terms that would undermine Belarus’ political sovereignty. That reluctance was also seen in the military realm, with Belarus in 2015 refusing to allow Russia to establish an airbase on its territory.

However, Lukashenko began to shift his tone after mass protests calling for his resignation last summer. Moscow provided Lukashenko with a $1.5 billion loan and promised that it would deploy a police reserve unit to Belarus “if the situation starts getting out of control.” Meanwhile, the United States and the European Union imposed sanctions against Lukashenko and his inner circle, leaving him with little choice but to lean more on Russia.

Last week, Lukashenko and Russian President Vladimir Putin announced that they had agreed on a 28-point economic integration roadmap, which they indicated could be adopted by the end of October.

Lukashenko also told reporters on Sunday that he plans to buy more than $1 billion worth of Russian weapons, including planes, helicopters, and air defense systems.

One possible items on the shopping list is Russia’s S-400 surface-to-air missile system, capable of shooting down aircraft and missiles within a 400 kilometer (250 mile) range and at an altitude of up to 30 kilometers (18 miles). If deployed to Belarus, the S-400 could extend Russia’s air defense system coverage to previously out of reach areas such as southern Poland and northwestern Ukraine.

Belarusian air force commander Igor Golub said early this year Belarus was in pre-contract talks about acquiring the S-400 from Russia. Lukashenko last month reiterated his government’s interest in the equipment, saying he had personally spoken with Putin about the matter and was “confident that we will get these systems.”

Some Russian analysts argue that despite Lukashenko’s recent moves he remains reluctant to follow Moscow’s lead.

In an article for the Gazeta.ru news website, he explained that as a rule, when two allies conduct a major exercise or operation together, they agree to submit their forces to the leadership of a single top commander, but Zapad-2021 is being jointly led by the Russian and Belarusian chiefs of staff.

“After many years of endless negotiations and consultations, [Russia and Belarus] were unable to agree on the operational subordination of any forces and means,” Khodarenok said. “Minsk has torpedoed all possible Russian efforts in this direction. In fact, one could even say that Alexander Lukashenko is sabotaging Moscow's plans to create a unified military decision-making center.”