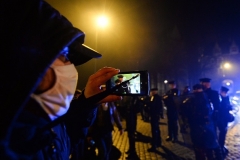 A man films police officers during a demonstration in the city of Nantes against the draft “global security” legislation. (Photo by Jean-Francois Monier/AFP via Getty Images)

Paris (CNSNews.com) – Amid ongoing national debate over allegations of police brutality, French lawmakers are planning to rewrite controversial legislation that would have set limits on the right to film police officers in action during protest demonstrations, following strong criticism from across the political spectrum and from press freedom advocates.

The decision was confirmed Wednesday by Prime Minister Jean Castex, who said on television that the so-called Article 24 of a proposed "global security" bill would go. He said the broader legislation was important to better ensure the security of citizens, adding that the government was increasing the resources available to both the security forces and justice department.

Castex, along with Interior Minister Gérald Darmanin, are trying allay concerns prompted by article 24. While it did not ban altogether the sharing of images of police in action, it did seek to outlaw the sharing of images with malicious intent – for instance, an attempt to to identify a particular police officer with the aim of encouraging violence or retribution against him. The provision would have carried a penalty of a fine equivalent to $54,000.

Parties on the right and left worried that the proposed measure would limit freedom of the press – especially in cases where police misconduct was occurring.

On the other hand Alliance, the biggest of several police unions in the country, called on the government earlier this year to ban images and videos of police on social media. It said its members frequently face threats while carrying out their duties, especially in poor and disadvantaged neighborhoods, where they are often filmed.

President Emmanuel Macron is reportedly furious about the controversy. On Monday he called on ministers to speedily recommend ways to “reaffirm the confidence that should naturally exist between the French and those who protect them, and to effectively fight discrimination.”

Upping the temperature, a music producer named Michel Zeclerc, who is black, was earlier beaten by police officers in his studio. The scenes, which were filmed by a camera in the building and showed police officers using racist language, stoked widespread anger.

Darmanin said on Sunday nearly a hundred police officers and gendarmes were injured during the protests, adding that “the perpetrators of this violence must be prosecuted.”

Meanwhile a Syrian freelance photographer covering the protests, Ameer al-Halbi, was allegedly assaulted by a baton-wielding police officer, prompting calls for an investigationfrom the AFP news agency – for whom he often worked – and the advocacy group Reporters Without Borders. Two of four police officers allegedly involved in the incident are in custody, the other two out on bail.

The proposed security legislation was passed in the lower House last month and is now under consideration in the Senate.

The leftist Rebellious France movement is pushing for the entire bill to be scrapped, while far-right National Rally leader Marine Le Pen said that laws to punish violence against the police already exist, but are not being enforced.

Patrick Mignola, leader of the Democratic Movement – an ally of Macron’s party – said while it supports the objective of having police protected, the measure must be completely rewritten in order to protect press freedom. He said in a television interview that although his movement had been divided over the legislation, it voted in favor in the House “without enthusiasm,” because it supported the overall aim of protecting police.