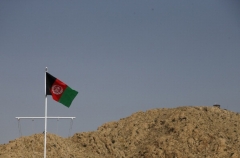 The Afghan national flag flies at a military base outside Kabul, vacated by French troops when they withdrew from Afghanistan in 2012. (Photo by Alexander Klein/AFP/GettyImages)

Paris (CNSNews.com) – French non-governmental organizations working in Afghanistan are anxious about the impact of the U.S. troops withdrawal now underway, but not all are happy with a proposal by the French ambassador in Kabul that Paris should grant asylum to the NGOs’ Afghan staff.

With the Taliban making advances in various parts of the country, humanitarian aid agencies and other NGOs worry about security once the U.S. and NATO forces have left.

Despite the uncertainty, the NGOs are continuing to work, and many say they deplore the idea that their Afghan employees should be encouraged to move to France.

In April, French Ambassador David Martinon told AFRANE, an association of French humanitarian aid agencies working in Afghanistan, of his concerns about the situation in the country due to the planned troop withdrawal.

Martinon warned that he expected the situation to deteriorate very quickly from the beginning of May – the date initially planned for the complete withdrawal of American forces under an agreement signed between the U.S. and the Taliban early last year.

That deadline came and went, but President Biden has announced that all troops will be out by September, a process that is moving rapidly ahead. NATO allies and partner forces are also leaving.

Martinon secured from the foreign ministry in Paris visa approval for Afghan AFRANE personnel, making them eligible for asylum in France.

Similar arrangements have reportedly been offered to all employees of the French Institute of Afghanistan (IFA), and to Afghan teachers of the French language at two Kabul high schools and four universities across the country.

AFRANE was founded shortly after the 1979 Soviet invasion of Afghanistan and has worked in the country since then, providing educational services to Afghans.

The IFA, which falls under the French foreign and culture ministries, promotes French culture internationally.

Since May, 600 Afghans who worked for France and their families, have been offered asylum on French soil, and according to Le Figaro daily 140 had arrived in France by the end of May. Asylum is being offered to those working with NGOs as well as at the embassy in Kabul, including drivers, cooks, and housekeeping staff

The ambassador’s intervention has not been welcomed by all French-linked NGOs and associations working in Afghanistan.

In a statement in May, several NGOs called Martinon’s fears overblown, saying they did not envisage imminent danger for their staff members.

They said the ambassador’s asylum proposal sent a bad signal to those seeking a political agreement, and to the broader Afghan population, delivering a message that the NGOs were “abandoning” them.

The statement was issued on behalf of more than a dozen French NGOs including AFRANE, Medecins Sans Frontieres and Chain of Hope, which works among the poorest people.

AFRANE vice president Étienne Gille told France 24 television at the end of June that the staffing situation had become “extremely worrying,” with the association having seen almost all of its 23 Afghan employees leave for France.

Françoise Hostalier, a French former lawmaker and president of the Paris-based France-Afghanistan Club, voiced opposition to the asylum offer, writing in a French Catholic newspaper, La Croix, back in May that it was as though France was saying a Taliban takeover of Afghanistan is a given.

The France-Afghanistan Club was set up in 2012 with the aim of supporting the presence of French companies and organizations in Afghanistan. Hostalier said small French NGOs have been operating in Afghanistan since 2002 – after the Taliban was toppled in a U.S.-led invasion – helping Afghans to rebuild the war-ravaged country.

She warned that the good done by France could be undone by the French government, with its proposal that could lead to an “exodus” of personnel attached to the NGOs.

French troops were deployed in Afghanistan from late 2001 with as many as 4,000 troops stationed there in 2009 as part of the NATO-led International Security Assistance Force (ISAF).

When the ISAF was replaced by NATO’s Resolute Support mission in 2012, French troops were withdrawn, leaving just a small logistics contingent in place.

Hostalier said it was curious that the offer of asylum being made now to NGO staff had not been available several years ago to Afghans who served as translators for the French military – even though they would likely be in more danger of reprisals in the future.