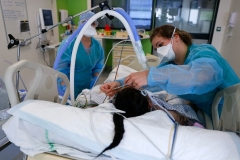 Nurses tend to a woman infected with COVID-19 in an intensive care unit of a hospital in Saint-Denis, Paris, on Monday. (Photo by Thomas Samson/AFP via Getty Images)

Paris (CNSNews.com) – With medical professionals warning of an impending health “disaster,” French President Emmanuel Macron took to the airwaves on Wednesday to announce new measures aimed at stemming the spread of coronavirus, including a national nighttime curfew, travel ban between different regions, three-week school closure, and a plan to have the entire population vaccinated by the end of the summer.

Some were hoping Macron would announce a third strict lockdown to tackle the crisis, but he stopped short of doing so.

He spoke days after doctors and public health officials warned in a published letter that due to overflowing intensive care facilities in Paris, there is a risk they will have to start making difficult decisions about which patients they will need to treat first.

“We do not wish, as professionals, as resuscitators, to take sole responsibility for such extreme situations,” Bertrand Guidet, head of the intensive care unit at a Paris hospital, told media on Tuesday.

By mid-week, the number of patients in intensive care has climbed to 5,072, beyond normal hospital capacity and more than during the peak of the second wave of COVID-19 in November, when 4,903 patients were in ICU departments.

Across the country, nearly nine out of ten intensive care beds are currently occupied, according to the Ministry of Health.

As of today, 28,322 people are in hospitals with the virus, including 1,017 new admissions over the past 24 hours. More than 94,600 deaths have been attributed to COVID-19 in France died since the start of the pandemic.

Health professionals warned earlier this month that if a strict lockdown is not put in place by April 1, the number of people hospitalized every day in the Paris region will rise to 230, almost double the current figure of 120.

“The good solution, if we want to stop the rise of COVID-19 patients, would be to impose a general and strict lockdown for at least two or three weeks,” Rafik Masmoudi, an ER doctor in a hospital in Paris, said in a television interview. “But it is the president and his government who take decisions, not us doctors.”

He pointed to the situation in Britain, where authorities announced this week that, for the second time this year, no COVID-19 deaths had been reported in London for one day. (During a spike last January, more than 200 deaths a day attributed to the coronavirus were reported in the British capital.)

Measures announced by Macron included extending a nighttime curfew, currently affecting about one-third of the population including Parisians, to the entire country. He also held out the possibility that outdoor café and some cultural venues could reopen from the middle of May, but with restrictions in place.

Macron said that France will use vaccines manufactured by AstraZeneca, Pfizer, Moderna, and Johnson and Johnson to reach his objective of vaccinating the population by the end of summer.

“Thanks to vaccines, the end of the crisis is on the horizon,” he said.

Early reactions to Macron’s speech included skepticism that his vaccination goal would be reached.