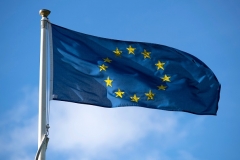 The flag of the European Union. (Photo by Matthew Horwood/Getty Images)

Berlin (CNSNews.com) – Fifteen months since the onset of the COVID-19 pandemic, European citizens have less confidence in European Union institutions, according to a series of polls commissioned by the European Council for Foreign Relations.

The trend is particularly evident in Germany which the ECFR said may be on the cusp of a “nationalist turn” ahead of its upcoming federal election.

The surveys also found that while levels of trust in transatlantic relations improved since President Joe Biden took office, they remain low overall.

Biden flew to Britain on Wednesday for a G7 summit, where he aims to work on “realizing America’s renewed commitment” with its European allies.

Conducted through April and May, the surveys were held across 12 E.U. member-states: the Netherlands, France, Sweden, Germany, Bulgaria, Portugal, Spain, Austria, Denmark, Hungary, Italy, and Poland.

They found decreased sentiment towards E.U. cooperation compared to last year in nine of the 12 countries surveyed, with Bulgaria, Denmark, and Sweden the exceptions.

The ECFR said in a report that majorities in Germany (68 percent), Austria (67 percent), France (62 percent), Italy (61 percent), and the Netherlands (55 percent) said they had less confidence in the E.U. since the start of the pandemic. Issues identified as concerns included the need for a more unified response and more control over external and internal borders.

The E.U.’s vaccine distribution plans have been beset by problems and delays. Some members have unilaterally obtained the Russian Sputnik V vaccine, even though it has not been approved by the bloc’s European Medicines Agency.

The ECFR took special note on Germany negative views due to its leading role in the E.U., reporting a “major collapse” of German trust in the bloc. It said, however, that it was unlikely a euroskeptic party such as the Alternative für Deutschland would win election later this year.

“Unless the political class finds a new way of engaging with citizens on European policy, the E.U.’s most populous member state could eventually take a nationalist turn,” the report said.

Still, majorities in every country except France and Germany felt that the pandemic has shown the need for closer European cooperation, rather than less.

“The results show that E.U. leaders still have an opportunity to use the bloc’s global role to reboot the permissive consensus for the European project – even at a moment when it is extremely fragile,” the authors said.

However, the fact that the E.U.’s two largest and most influential states – France and Germany – were the least convinced about the E.U. sent urgent signals, according to the thinktank.

“There is greater disappointment with the political system than when we surveyed E.U. citizens last year,” it said. “If the E.U. fails to build up its resilience to the new sorts of crises our interconnected world faces today, our data indicate that the E.U. itself may risk becoming another casualty of COVID-19.”

Views on the US

Confidence in the U.S. was also surveyed, and found to be relatively low. In eight of the 12 countries (the Netherlands, France, Sweden, Germany, Bulgaria, Portugal, Spain, and Austria) fewer than 40 percent of respondents believed the U.S. political system was “working well.”

Only Italy (60 percent), Hungary (59 percent), and Poland (67 percent) had majorities holding that opinion.

Even so, belief that the U.S. system works well rose since last November in every country surveyed except Bulgaria. The was especially notable in Germany (a rise from 19 to 34 percent), Italy (36 to 60 percent) and Denmark (22 to 50 percent). Bulgaria’s number dropped from 38 to 34 points.

The survey results appear to align with those in a Eurobarometer poll last week, which found 50 percent of Europeans were not satisfied with the measures taken by the E.U. to deal with the pandemic, versus 48 percent who were satisfied.

Germany was the most dissatisfied E.U. member, with 63 percent of respondents unhappy with how the bloc has dealt with the emergency, followed by France at 60 percent.

In an op-ed for Foreign Policy, ECFR director Susi Dennison argued that as it is now too late for the E.U. to salvage its image over the vaccine rollout, it needs to show strong leadership in the area of pandemic recovery.

“Rebuilding the conditions to allow citizens to live, work, and travel normally within Europe is one way E.U. institutions and member states can reboot the European project,” she said.