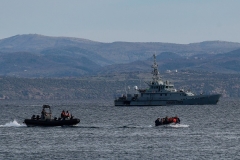 Berlin (CNSNews.com) – A European Union plan to encourage “voluntary returns” for illegal migrants has raised questions over the expanding role of its border force, which just had its budget plan postponed over human rights concerns amid investigations for misconduct.

The E.U.’s executive Commission unveiled a plan on Tuesday that aims to improve the rate of returns of illegal migrants – those who are unsuccessful in their asylum applications – by establishing common procedures and rules across the union, and improving the coordination of returns with migrants’ countries of origin.

It has already attracted criticism, however, for the leading role envisaged for the European Border and Coast Guard Agency, known as Frontex.

The agency is currently under investigation by the European Parliament, the E.U.’s anti-fraud office, and the European Ombudsman over claims of human rights abuses and misconduct. Frontex denies claims that it has pushed migrants back from reaching E.U. shores by sea, in Greek waters.

The claim arose from videos in June which allegedly showed a Frontex ship blocking a small migrant’ boat near the Greek island of Lesbos. Critics claimed it was complicit in an illegal “pushback” in which Greek coastguard boats pulled a raft carrying migrants from Greek water into Turkish ones.

At a press conference on Tuesday, E.U. commissioner for home affairs Ylva Johansson  rejected criticism of Frontex’s expanded role, citing an inquiry by the agency’s own board that concluded no misconduct had occurred.

Johansson said Frontex was “well placed” to take on the returns task and would carry out its responsibilities in a “European, human and value-driven” manner.

Nonetheless, the European Parliament on Wednesday voted to postpone the agency’s budget planning over the human rights allegations, warning that it must provide clarification, improve transparency, and explain its failure to hire 40 “fundamental rights” officers by a December 2020 deadline, set by an E.U. regulation in 2019.

“If Frontex does not make improvements by autumn, there is a risk of budget cuts,” warned Daniel Freund, a German MEP with the Greens.

The European Commission has long been working on proposals for a coordinated migration policy at the E.U. level that would improve the rate of returns for migrants whose asylum applications are rejected, but has struggled to overcome divisions among member-states on the issue.

According to Johansson, only about one-third of rejected migrants actually return to their countries of origin, and “of those who do, fewer than 30 percent do so voluntarily.”

She said voluntary returns were both “a more dignified way for individuals and cheaper for member states.”

European Commission vice-president Margaritis Schinas said on Tuesday that any European policy for migration and asylum would have to have “a significant returns procedure.”

“Europe will remain an asylum destination for those fleeing persecution and war,” he tweeted. “However, those with no right to stay will have to be returned to their countries of origin. Not doing so undermines the credibility of our system and prevents us from protecting those who need it.”

Catherine Woollard, director of the European Council on Refugees and Exiles, said while voluntary return is preferable to forced return, it was a risky move to give additional roles to Frontex.

“From a human rights perspective, voluntary return is far preferable because it is a process that involves less risk of violations, and less coercion and loss of dignity,” Woollard said. “For instance, forced return invariably involves detention and often involves restraint and even abuse during deportation.”

At the same time, she said, the expansion in Frontex’s role raise concerns at a time when the agency is in the spotlight in relation to “fundamental violations in Europe and at the borders” which suggest that its accountability mechanisms appear inadequate.

“In third countries, Frontex tends to operate a parallel foreign policy and one that remains very opaque, which can undermine broader E.U. external affairs policies,” she said.

Woollard also said protection rates across the E.U. vary widely, and likened asylum decisions in Europe to a “lottery.”

According to E.U. statistics, 416,600 first-time asylum seekers lodged applications in 2020, compared to 699,000 in 2019. For both years, Syria and Afghanistan were the top countries or origin. The drop was attributed to COVID-19-related movement restrictions and border closures imposed by member states.

Last week, the Danish government revoked the residency permits of some Syrian refugees after declaring the region safe last summer despite the ongoing civil war – an assessment that has drawn heavy criticism.