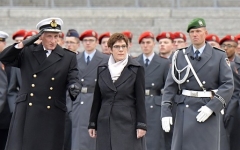 Berlin (CNSNews.com) – German lawmakers have responded mostly skeptically to a proposal by the parliament’s military commissioner for a return to compulsory military service, questioning her argument that the move would help to counter the problem of far-right extremism in the armed forces.

Since compulsory military service was discontinued in 2011, the Bundeswehr has slowly diminished in size, dropping from 250,000 troops to 184,000 today.

Recent reports of far-right sentiment within the ranks have made headlines.

Last week, Defense Minister Annagret Kramp-Karrenbauer ordered the reorganization of the Special Forces Command (KSK) unit after reports emerged that the group had adopted a culture of Nazi glorification, for example using 88, code for Heil Hitler, as its official callsign.

In response, Eva Högl, Germany’s parliamentary commissioner for the armed forces and a member of the Social Democrat (SPD) party, called for the reintroduction of compulsory military service, saying scrapping it had been a “huge mistake.”

Her call has largely met with opposition, from both the SPD and its coalition partner in government, Chancellor Angela Merkel’s Christian Democrats (CDU), with critics voicing doubt that the move would combat far-right extremism.

“Conscription is a recurring theme and is not related to the endangered democratic stability of individual areas of the Bundeswehr that have never been filled by conscripts,” they said, referring to the controversial KSK unit.

CDU defense spokesman Johann Wadephul welcomed the general idea of reopening a debate on military service, but said he doubts conscription would have the impact suggested by Högl.

“A straightforward return to conscription for men falls short – especially if the justification for it is supposed to be [tackling] far-right extremism,” he told Die Welt. “No professional soldier is turned away from misdirected ideas because they are training conscripted soldiers.”

AfD defense spokesman Rüdiger Lucassen called the idea the “first meaningful proposal by the SPD for many years.”

“Now all she has to do is convince her own party and the CDU.”

Lucassen did not mention the issue of far-right extremism, but said that compulsory service “guarantees a healthy mix of soldiers from all walks of life.”

The AfD has repeatedly grappled with its own extreme elements, and in April party co-leader Jörg Meuthen suggested a split from its nationalistic “wing,” to increase voter support.

Some have also criticized a proposal by Kramp-Karrenbauer for a new program of voluntary national service, which she is calling “Your Year for Germany.”

Voluntary military service for a period of up to 23 months already exists, but Kramp-Karrenbauer suggested a system that would be “supplementary” to the existing one, limited to 12 months, and with half of that time deployed in reserve services close to home.

Marie-Agnes Strack-Zimmermann, defense spokeswoman for the liberal democrats (FDP), rejected the idea, saying a mandatory year of national service “encroaches on the freedom rights of the individual, is simply unconstitutional, and the FDP will decisively oppose it.”

Hans-Peter Bartels, Högl’s predecessor in the military commissioner post, said the idea would not work since the Bundeswehr lacks the resources – including barracks space, equipment, weapons, and funding – to restore conscription.

André Wüstner, chairman of the Bundeswehr Association, said the ending of conscription had taken place “rashly,” and that Högl’s suggestion to have a debate on the matter was correct.

But “it would be a mistake to rush to re-enact conscription,” he told the broadcaster SWR, citing costs as well as questions of infrastructure and training capacity.

Nariman Hammouti, chairperson of Deutscher.Soldat – a non-profit association of German soldiers – said rather than reintroduce conscription, other measures were needed.

“Forcing people to join the army, I don't think that will do anything about far-right extremism,” she told public broadcaster ARD.

Hammouti, herself a soldier, said the problem lies in the fact that soldier security checks have only been performed since 2017, and only on new recruits, arguing that checks should also be performed on all who haven’t been through one.

She also said procedures to discharge problem soldiers need to be simplified.