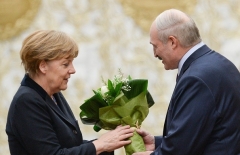 Belarusian President Alexander Lukashenko and German Chancellor Angela Merkel during a 2015 meeting focused on the conflict in Ukraine. (Photo by Maxim Malinovsky/AFP via Getty Images)

Berlin (CNSNews.com) – Outgoing German Chancellor Angela Merkel is fending off criticism from Poland and Lithuania after holding two phone conversations with Belarusian President Alexander Lukashenko, whose disputed re-election last year has not been recognized by the European Union.

The critics, joined by some German lawmakers, said the outreach undermined the non-recognition stance, at a time when tensions remain high over Lukashenko’s alleged weaponization of migrants along the E.U.’s external borders.

The exiled Belarusian opposition leader, Sviatlana Tichanovskaya, described Merkel’s conversations with Lukashenko as “very strange” for those who are resisting the regime. She urged E.U. governments not to engage with the regime until it releases political prisoners and ends violence against the opposition and demonstrators.

In a bid to allay the concern, Merkel then called Tichanovskaya to reassure her of Germany’s continued support for the Belarusian opposition.

He said Merkel also reiterated calls on the regime to stop “repression against the opposition and independent journalists, release prisoners and enter into a serious dialogue with society.”

Merkel made the calls last week. Her spokesperson said later the conversations focused on humanitarian care and returning the migrants stranded on the Belarus-Poland border to their home countries.

But the regime in Minsk then suggested that Merkel and Lukashenko had discussed a “humanitarian corridor” that could allow 2,000 of the migrants to settle in the E.U.

The claim raised eyebrows, prompting the government to clarify that Germany had not unilaterally accepted any proposal and would not have done so without E.U. input.

The West does not recognize Lukashenko as president over allegations of widespread fraud in the August 2020 election. In apparent retaliation for E.U. sanctions, Lukashenko has allegedly been encouraging illegal migrants, from mostly Mideast countries, to cross Belarus’ borders into the E.U.

Criticism of Merkel’s calls came from the governments of the two countries neighboring Belarus that have been most impacted by Lukashenko’s migrant gambit, Poland and Lithuania.

Polish government spokesman Piotr Müller said that while his government had been informed in advance of Merkel’s first phone call with Lukashenko, it was worrying.

He told the Polish public broadcaster TVP that the Merkel call “in a way” constituted acceptance of the outcome of the August 2020 election.

Lithuanian President Gitanas Nausda called Merkel to verify the purpose of the calls.

“I wanted to know very precisely what had been discussed, what commitments had been made or ... had not been made, so as to dispel the myths that are now being circulated,” he told reporters during a visit Monday to Lithuanian military personnel stationed on the border with Belarus.

“I want to be very clear: there were no agreements on the distribution of migrants issue,” Nausda said.

Merkel also drew fire at home, with Greens politician Omid Nouripour saying he found it “devastating” that she had spoken by phone to Lukashenko.

There must be a clear political line that Alexander Lukashenko is no longer recognized as president, Nouripour told Deutschlandfunk radio.

European Commission president Ursula von der Leyen said in the European Parliament on Tuesday that the E.U.’s executive body wants to sanction travel companies complicit in the Belarus migrant scheme via a blacklist.

She also announced a tripling of assistance over the next six years to Poland, Lithuania, and Latvia for border management.

Berlin has reiterated its rejection of Lukashenko’s call for it to take in 2,000 refugees, with Siebert saying, “This is not a solution that is acceptable for Germany or the E.U.”

The point was underlined by Horst Seehofer, who is acting federal interior minister until a new coalition government is formed.

“We have a very clear position from the federal government that is still in office, namely that we support the Poles in securing the external border of the European Union,” he said during an online Federal Criminal Police Office meeting.

Seehofer, who is due to fly to Warsaw for talks on Thursday, also rejected calls from some quarters for Germany to set up border controls at its border with Poland, to prevent migrants who illegally cross from Belarus into Poland from reaching German territory.

“Firstly, that wouldn’t solve the problem and, secondly, it would stab the Poles in the back,” he said. “And we are not allowed to do that under any circumstances.”