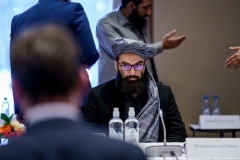 Taliban representative Anas Haqqani at the talks in Oslo on Monday. (Photo by Stian Lysberg Solum/NTB/AFP via Getty Images)

(CNSNews.com) – Norway’s government said Tuesday that three days of closed-door talks involving the Taliban, Western diplomats, non-governmental organizations, and Afghan civil society groups did not amount to recognition or legitimization of the Islamist group, but was a chance to push the regime towards observing human rights.

"We are going to place tangible demands that we can follow up on and see if they have been met,” Henrik Thune, state secretary in the Norwegian foreign ministry, told Norwegian broadcaster NTB.

Those demands would include respect for human rights, in particular access to education and health services, the right to work, and freedom of movement for women and minorities, he said.

No press conference was held after the meetings ended.

Ahead of the talks, Foreign Minister Anniken Huitfeldt stressed they did not mean recognition of the group, which seized power in Kabul last August.

“These meetings do not represent a legitimization or recognition of the Taliban. But we must talk to the de facto authorities in the country,” she said. “We cannot allow the political situation to lead to an even worse humanitarian disaster.”

The three-day talks involved an all-male Taliban delegation and diplomats from Norway, the U.S., Britain, France, Italy, Germany, and the European Union.

The Taliban participated because it wants to unblock $10 billion in international aid funding, halted after Kabul fell, amid a deteriorating humanitarian situation in Afghanistan, worsened by severe drought.

The U.N. said last month nearly 23 million people, or 55 per cent of the population, were facing extreme levels of hunger, and this month the world body launched its “largest single country aid appeal ever,” requesting more than $5 billion in humanitarian funding.

The Norwegian government chartered a jet and provided hotel accommodation for the delegation, which included Anas Haqqani, whose brother Sirajuddin Haqqani is a U.S.-wanted terrorist. (The U.S. has described Anas Haqqani is “a leading figure and fund-raiser” for the Haqqani Network, a U.S.-designated foreign terrorist organization.)

Critics panned the government for the expense, for the presence of Haqqani, and over the fact the talks came amid accusations over the disappearance of two Afghan women rights activists. The Taliban has denied responsibility.

Sylvi Listhaug, head of the right-wing Progress Party, said it was “a meaningless use of taxpayers’ money, to invite the extremist terror organization Taliban on a luxury tour to Oslo.”

“The Taliban has sent 15 men and zero women,” she told NTB. “That says the most.”

Members of the Afghan diaspora living in Norway protested in Oslo over the weekend.

Kristian Berg Harpviken, director of the Peace Research Institute Oslo, told Nettavisen that even though Norway says the talks don’t constitute formal recognition, “it is of course also true, as the Taliban says, that it is an implicit recognition that the Taliban are in power.”

Some saw the talks as an opportunity, however.

Afghan women’s rights activist Mahbouba Seraj, who took part in some of the civil society meetings, said Norway should not be criticized.

“I have been asking the Taliban for five-and-a-half months; give me a moment so I can sit on the other side of the table and talk to you,” she told Norwegian news outlet VG.

“It did not happen, but here I finally got the chance to talk to them today. It is thanks to Norway.”

German special representative for Afghanistan Jasper Wieck tweeted that during the talks he had “made clear that detentions, disappearances and harassments create a dangerous climate of intimidation. And that women and girls across the country need to be given access to all school levels.”

“As we seek to address [the] humanitarian crisis together with allies, partners, and relief orgs, we will continue clear-eyed diplomacy with the Taliban regarding our concerns and our abiding interest in a stable, rights-respecting and inclusive Afghanistan,” West wrote on Twitter earlier.

No country has yet formally recognized the Taliban, though the Islamist group highlighted the talks as signaling engagement with the “new government.”

Taliban foreign ministry spokesman Abdul Qahar Balkhi said in a tweet that according to Niklasson, the E.U. will continue humanitarian aid to Afghanistan.

In response, Niklasson stressed that he had “also underlined the need for primary and secondary schools to be accessible for boys and girls throughout the country when the school year starts in March.”

Last week, the Taliban said it aims to have schools for girls reopen by late March.